Join For Free
Share your location Order within 7 hrs 48 mins. 12 secs.
In Stock & Ready to Ship Orders placed before 3 p.m. ET usually ship the same business day (except weekends and holidays).
Ship to
Please enter 5 digits
Free Shipping Shipping and Delivery Times If we promise a delivery date and a delivery attempt is not made by this date, we will provide a refund of any shipping fees associated with your order. Questions? Call 800-449-9128
site1skuJ03718000000000 true MFI=4 true Change Location 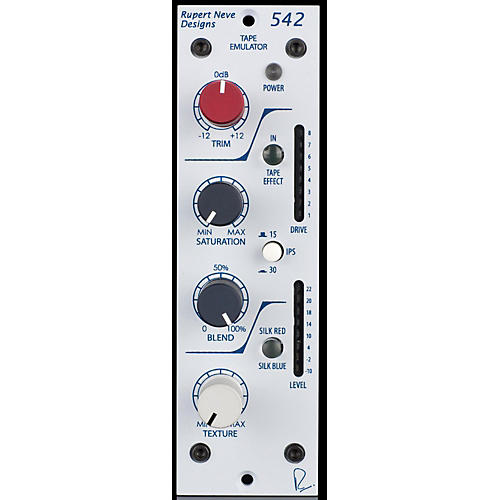 As a 500-series follow-up to the Portico 5042, the 542 delivers the same thick, musical simulation of tape while drastically enhancing creative control via a number of new features. In addition to the the "true tape" circuitry - great for bringing out 3rd-order harmonics - the 542 incorporates a soft-clip circuit that tames the harshest sources and enhances 2nd-order harmonics, a variable and versatile Silk/Texture circuit for three transformer tones in one, and a wet/dry control to blend in the perfect amount of saturation. While it's challenging to design 500-series modules that are equal to their non-500 series counterparts, the team at Rupert Neve experimented with a number of different transformer and circuit designs so they could achieve the same presence and sweetness that is found in the standard Portico Series modules making them perfectly suited for the highest caliber studio environments.

The 542's "True Tape" emulation circuit provides the nostalgic rounding and compression usually only achieved by the use of tape, and can offset the harshness often found in digital recordings. Unlike digital emulations, the "True Tape" drive circuit works by feeding a tiny magnetic "record head", whichin turn is coupled to a correctly equalized, replay amplifier. As the voltage rises on the "record head", saturation increases, and a soft clip circuit engages at higher levels to round off peak transients. The sound of the tape circuit can be further modified with selectable 15 / 30 IPS modes and a pre/post-tape blend control. In addition to the tape circuit, the 542 also has the variable Silk & Texture circuitry found in the Portico II series of modules, which allows the engineer to fine-tune the harmonic ratio and tonality on the output transformer.

Adding Texture
Both Silk modes are modified and fine tuned by the "Texture" control. By manipulating the Texture control, the amount of Silk can be changed from essentially absent, to roughly four times the amount of coloration found in Silk from the original Portico Series. With Silk / Texture engaged, the distortion characteristic and harmonic content of the unit are very reminiscent of many of Rupert's vintage class-A designs. These controls add another realm of tonal control to the 542, and should be explored creatively in conjunction with the "True Tape" for best effect.

Designed for 500 Series
The 542 consists of a line driving amplifier having transformer balanced inputs and outputs. The sonic quality of these amplifiers is such that by providing galvanic isolation, simple single-sided circuit topology and freedom from grounding problems, they are capable of enhancing the sonic quality of many signal sources, especially those of digital origin. The sonic "signature" is one of extreme purity and the image is consistent with that of Rupert Neve's original designs of 35-40 years ago.

The ultimate module to give your sound "color".