*Qualifying purchase (excluding gift certificates) must be one receipt. 6 month special financing excludes open box gear and cannot be combined with promotional coupons or manual discounts. No interest will be charged on the promo purchase if you pay the promo purchase amount in full within the promotional period. If you do not, interest will be charged on the promo purchase from the purchase date. Depending on purchase amount, promotion length and payment allocation, the required minimum monthly payments may or may not pay off the purchase by the end of the promotional period. Regular account terms apply to non-promotional purchases and, after the promotion ends, to the promotional balance. For new accounts: The Purchase APR is 29.99%; Minimum Interest Charge is $2. Existing cardholders should see their credit card agreement for their applicable terms. Subject to credit approval.
More ways to pay:
Loyalty Points Icon
Earn 4,160 reward points
($41.60 in credit)
Earn 4,160 reward pts.
($41.60 in credit)

Join For Free
Share your location Order within 7 hrs 48 mins. 12 secs.
In Stock & Ready to Ship Orders placed before 3 p.m. ET usually ship the same business day (except weekends and holidays).
Ship to
Please enter 5 digits
Free Shipping Shipping and Delivery Times If we promise a delivery date and a delivery attempt is not made by this date, we will provide a refund of any shipping fees associated with your order. Questions? Call 800-449-9128
site1skuH76003000000000 true Change Location 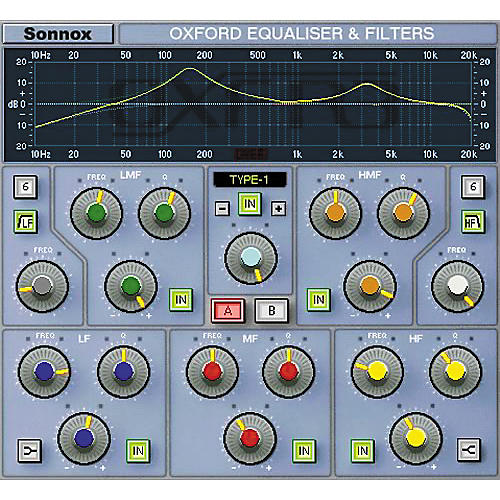 Based on the EQ section of the Sony OXF-R3 digital console.

The renowned Oxford EQ for Pro Tools HD/HDX Systems is based on the original EQ section of the Sony OXF-R3 large format digital mixing console. It is a 5-band EQ with selectable shelf settings on LF and HF sections. Additionally, separate variable slope low pass and high pass filters are provided. The Oxford EQ also features four different EQ curves that cover a broad array of styles, including some legacy styles which are renowned for their artistic capability. The use of novel coefficient generation and intelligent processing design provides unparalleled performance that surpasses analogue EQ in both sound quality and artistic freedom. The Oxford EQ truly is four equalisers in one plug-in and will provide all the EQ you'll ever need!


General
Programme equalisers have expanded, beyond their original use as distance correction devices for film and vision, into highly creative tools that represent a leading part of the sound engineer's artistic palette. A great many EQ designs have been developed over the years that have been attributed with qualities that lend themselves to particular uses and sounds. The Sonnox Oxford EQ plug-in is designed to be flexible enough to address as many of these generic types as possible from a single application by presenting a variety of types to the user.


Control Ranges & Interaction (types of EQ)
There are many different types of EQ, which differ in many areas. One of the most important areas is the issue of control ranges and interaction. Whilst it is true that with a parametric unit with continuous controls (i.e. not quantised) any response could be obtained by matching their curves, many of the popular EQs have control dependencies that lean towards a specific application. One of the main areas where EQs differ is Gain / Q dependency. Most analogue EQ has Gain / Q dependency as a result of the circuits used. This factor can greatly affect the artistic style that an EQ presents by facilitating certain parameter settings and encouraging particular uses when the unit is operated. In the Sonnox Oxford EQ plug-in we have covered this situation by providing 3 different styles of EQ that take account of Gain / Q dependency as well as overall control ranges.

Sonnox Oxford EQ Types
There are 4 types of EQ as standard in the Sonnox Oxford EQ, plus an option for a fully approved GML 8200 emulation, for Pro Tools and HD. The differences between the types are reflected within the curve characteristics of the bell settings. The shelving curves are the same for all 4 types. They include the use of the 'Q' controls allowing and amount of 'undershoot' to be dialed in for boost settings, and overshoot when a shelf is used in cut settings. As an example, when applying an HF shelf, adding Q will cause the mid range just below the shelf to be cut, whilst simultaneously increasing the slope of the rise to the shelf. This has the effect of reducing perceived harshness, sweetening the sound, much like the legacy Neve and SSL G Series EQs.

EQ Type 1
This EQ can be regarded as a general and multi-purpose 'sharp' or clinical tool. Its response curves are very similar to that of the EQs in the SL4000E consoles, popular in the 80's. Characterised with minimal gain/Q dependency, the shape of the peak of the boost and cut curves, when in 'bell', remain virtually constant according to the Q setting, no matter what level of boost or cut is in use. Even so, it is possible to mimic many other EQ types with Type 1, due to the flexibility of the control ranges. The boost and cut curves are mirror images of each other, termed reciprocal.

EQ Type 3
This is a reciprocal EQ which has a moderate amount gain/Q dependency. This means that at lower boost and cut settings, the shape of the curve is broader, becoming progressively sharper with increased boost or cut. This characteristic feels very comfortable to the ears and this type of EQ is often deemed musical, resembling older well-loved Neve types and the SSL G-Series which came along in the late 80's.

EQ Type 4
This type has the greatest gain/Q dependency. Its characteristics are very soft and gentle, likely to be extremely useful in mastering situations.


GML Option (AAX DSP, TDM & HD only)
This EQ emulates the GML-8200 rack EQ unit, but still uses the control same interface as the Sonnox Oxford EQs. It has the same highly accurate control range and law matching in order to retain the exact operational characteristics of the analogue units. It's an extremely accurate emulation of the 8200, fully endorsed by George Massenburg, with an HF centre frequency going all the way up to 26kHz, just like the real thing.