*Qualifying purchase (excluding gift certificates) must be one receipt. 6 month special financing excludes open box gear and cannot be combined with promotional coupons or manual discounts. No interest will be charged on the promo purchase if you pay the promo purchase amount in full within the promotional period. If you do not, interest will be charged on the promo purchase from the purchase date. Depending on purchase amount, promotion length and payment allocation, the required minimum monthly payments may or may not pay off the purchase by the end of the promotional period. Regular account terms apply to non-promotional purchases and, after the promotion ends, to the promotional balance. For new accounts: The Purchase APR is 29.99%; Minimum Interest Charge is $2. Existing cardholders should see their credit card agreement for their applicable terms. Subject to credit approval.
More ways to pay:
Loyalty Points Icon
Earn 1,592 reward points
($15.92 in credit)
Earn 1,592 reward pts.
($15.92 in credit)

Join For Free
Share your location Order within 7 hrs 48 mins. 12 secs.
In Stock & Ready to Ship Orders placed before 3 p.m. ET usually ship the same business day (except weekends and holidays).
Ship to
Please enter 5 digits
Free Shipping Shipping and Delivery Times If we promise a delivery date and a delivery attempt is not made by this date, we will provide a refund of any shipping fees associated with your order. Questions? Call 800-449-9128
site1skuJ27691000000000 true Change Location 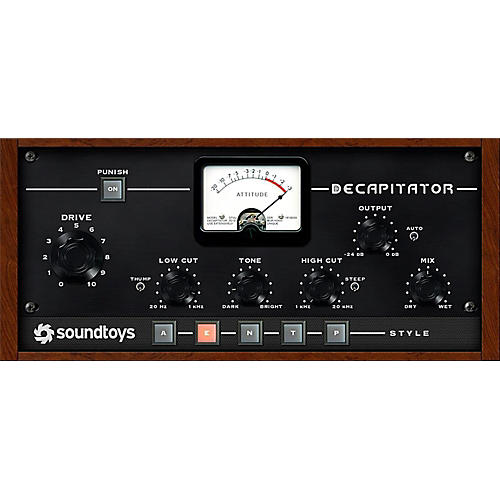 Saturation—it’s the essence of what makes analog hardware sound so musical and pleasing to the ears. The sound of tubes, transistors, and circuitry being pushed to the limit has long been the key ingredient in great-sounding analog recordings. Engineers use saturation to beef things up, thin them out, give them edge, add warmth, pull elements out of the mix, and create signature sounds.

From the very subtle to the extreme, analog saturation is an integral part of great mixes. That’s why we took our time, studied all the great analog classics, and painstakingly created a plug-in that brings the best of analog saturation to your digital studio.

With five different analog saturation models to choose from, Decapitator is perfect for adding character to every kind of track and instrument in your mixes. Soundtoys also included a modeled tone control that lets you shape the saturated sound, and a mix control that lets you blend in some dry signal for parallel processing without the need for routing and sub-mixes. Combine all of this with the flexibility and reliability of a Soundtoys plug-in, and you’ve got the best of analog and digital together in one essential effect.

Analog Feel
Decapitator is not just a simple approximation of the analog sound. Soundtoys worked hard to capture the feel of analog gear. Not a static snapshot, but a changing responsive model of all those tubes, wires and transistors. That means you can hear subtle changes as Decapitator reacts to a track and follows the dynamics of an instrument. That’s what analog is all about.

In creating Decapitator, Soundtoys collected and analyzed both vintage and modern hardware—consoles, preamps, input channels, EQs, compressors and studio distortion units. They picked the pieces of gear they felt had the most distinctive sound, and had unique character when used both subtly and at extremes. Then they created painstakingly accurate models and made them instantly accessible. By adding an analog-modeled tone control and mix knob, they've opened up the sonic potential of these models even more.

Bad Boy
Decapitator is capable of some wonderfully subtle sounds, but sometimes subtle just won’t do it. That's the purpose of the Punish button, which kicks in an extra chunk of gain to push Decapitator over the edge. When you drive it hard it reacts just like great analog gear—it screams in pain.

Decapitator gives you those unique qualities that only come from driving high end studio gear. Each model has its own sound of beautiful agony when you hit the Punish button and crank it up. Try it on vocals, drums, guitars, synths—anything that sounds a little too polite!