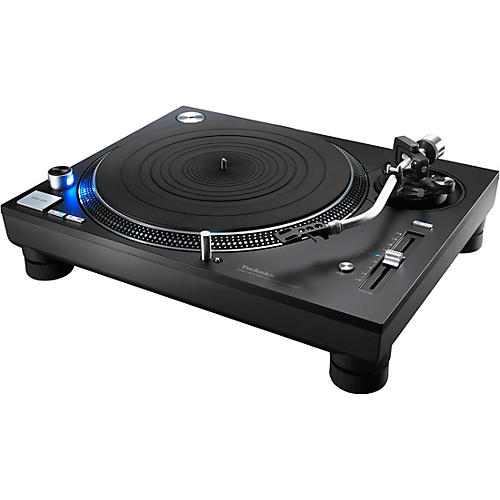 Join For Free
Share your location Order within 7 hrs 48 mins. 12 secs.
In Stock & Ready to Ship Orders placed before 3 p.m. ET usually ship the same business day (except weekends and holidays).
Ship to
Please enter 5 digits
Free Shipping Shipping and Delivery Times If we promise a delivery date and a delivery attempt is not made by this date, we will provide a refund of any shipping fees associated with your order. Questions? Call 800-449-9128
site1skuK46548000000000 true MFI=0 true Change Location

The undisputed, industry-standard professional DJ turntable has been reincarnated, now boasting advanced digital technology including a coreless direct-drive motor for increased stability and performance. Maintaining its predecessors' classic styling and feel, the SL-1210GR delivers improved damping for high-end playback and recessed gold-plated terminals for detachable RCA cables. This is no ordinary record player—this is Technics' latest model in the Grand Class SL-1200 Series of turntables aimed at professional DJs and discriminating audiophiles who are unwilling to compromise on quality.

Technics' pedigree in the realm of designing direct-drive turntables is undeniable; it released the world's first direct-drive turntable in 1970, at the dawn of disco and hip-hop music. The SL-1200 turntable became a favorite of early hip-hop DJs, who took advantage of its quick start-up time and high-torque motor to perfect scratching and other turntablism techniques. Eventually disco DJs and the early pioneers of house music used the SL-1200 for more than just playing records—they utilized the 1200s' pitch adjustment for beat matching and blending songs together seamlessly. Both hip-hop and house DJs used two turntables side-by-side along with identical copies or "doubles" of records to selectively play and loop the best parts of a song, effectively remixing songs on the fly in nightclubs. Thanks to its integral role in the birth and development of those genres of music, the Technics SL-1200 turntable became a fixture in virtually every DJ booth around the world.

At first glance the SL-1210GR seems unchanged from previous generations of SL-1210 models, sporting the same styling, layout and all-black color scheme. Upon closer inspection, you'll notice the SL-1210GR's tonearm base and gimbal assembly have been updated to match the blacked-out look. Otherwise, everything looks exactly like you'd expect a Technics deck to look.

Turning the hefty record player around, you'll instantly see the rear of the unit has been redesigned, sharing the same look as its bigger and more expensive sibling, the SL-1200G. A recessed space houses terminals for detachable RCA cables and a ground cable, adding a welcome bit of convenience for any DJ who has ever experienced a shorted-out RCA on a legacy SL-1200 model.

But the real differences between the SL-1210GR and previous SL-1200 generations lie below the surface. At the heart of this professional turntable sits a totally redesigned single-rotor, surface-facing, coreless direct-drive motor which generates an impressive amount of torque and also eliminates a problematic phenomenon called cogging. The result is greater rotational stability and improved sound quality.

As you'd expect from a turntable of this pedigree, the SL-1210GR features a build quality and feel that is nothing short of rock solid. Weighing in at a stout 25.35 lb., this pro-grade record player features a chassis whose top plate is cast from aluminum, while the bottom half is molded from ultra-dense and robust BMC.

Staying true to the original SL-1200 lineup's proven design, the SL-120GR features a platter made from a single aluminum casting. By applying deadening rubber to the platter's entire rear surface, Technics was able to improve its damping for clearer sound. With a heavier overall weight and improved rigidity, the SL-1210GR's platter delivers lower vibration than its predecessors.

Designed and built in Japan, the SL-1210GR is intended to provide uncompromising professional performance for demanding DJs and audiophiles alike, all the while living up to the reputation for reliability you've come to expect from the venerable SL-1200 lineup over the past four decades.

For uncompromising build quality and performance, order yours today.