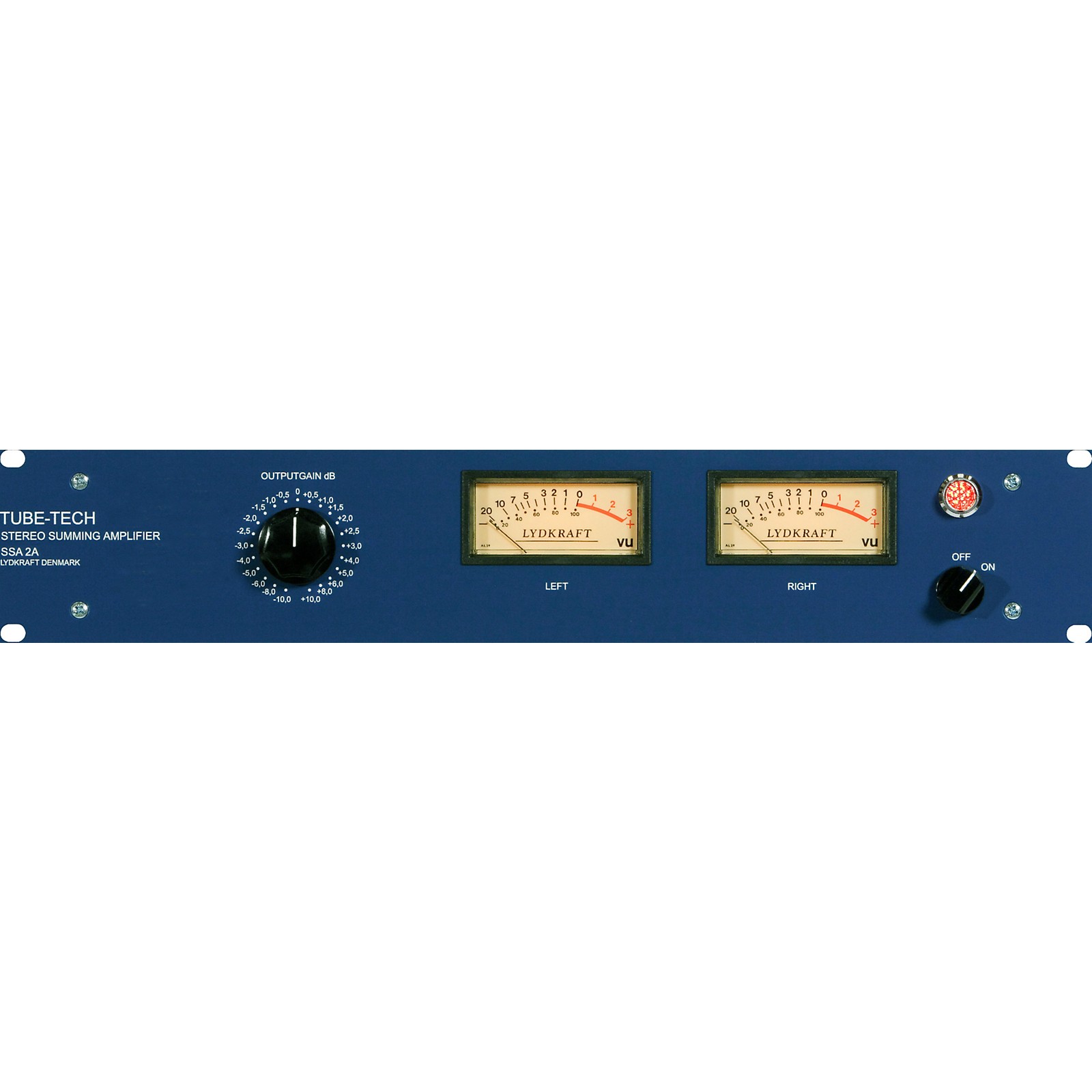 The Tube-Tech SSA 2B summing amplifier has 4 mono input (hard wired to CH1 and CH2) and 8 stereo inputs, which are summed to two outputs. The SSA 2A consists of a summing amplifier at the input, a 23 stepped attenuator with a range of +/- 10 dB and an output stage. Two large VU-meters show the levels on the XLR output sockets. To avoid the distortion introduced by the VU-meters when connected directly to the output XLR sockets, symmetrical configured OP- amps buffer the VU-meters. The summing amplifier is a symmetrical two-stage amplifier, designed around two dual, low impedance, and high transconductance triodes. The input transformer is part of the dual feedback configured as a so-called zero field transformer. The attenuator is a heavy gilded 2 x 23-position switch with steps of +/- 0.5, 1, 1.5, 2, 2.5, 3, 4, 5, 6, 8, 10dB. The output stage is designed around two dual triodes in push-pull and an output transformer (with a static screen). Both the summing amplifiers and the output amplifiers are symmetrical.

All inputs on the Tube-Tech summing amplifier are balanced by two zero field transformers (one for each channel). In zero field transformer configurations, the transformer is part of the feedback circuit. There are several benefits to be derived from this: 1. The voltage across the transformer is reduced substantially, whereby a much smaller transformer is needed for the same specification. The reduction is of the same magnitude as the feedback applied. 2. The distortion at low frequencies is reduced substantially. 3. Frequency response in both the low and high range is extended. 4. Phase response in both the low and high range is more linear. The results are better harmonic balance of the instruments and more realistic sound.

The outputs are balanced and have fully floating transformers with a static screen. Floating a transformer (not referenced to ground) provides maximum electronic isolation for superior noise rejection. The static screens shield the transformer's secondary windings from the primary and prevent RF (radio frequency) electromagnetic noise from getting across. The Tube-Tech amp's Line Input is unbalanced, but an optional transformer is available, which will allow the line in to act as though it's balanced. The power supply and the sidechain circuits of the Tube-Tech SSA-2B summing amplifier are based on a solid-state circuit. With the exception of the output stage all DC voltages are stabilized. This prevents any variation in the DC energy when combined with the musical signal, which would otherwise cause certain types of distortion or hum.

Mix inside a better box and add the rich, smooth world-class sound of Tube-Tech to your tracks.