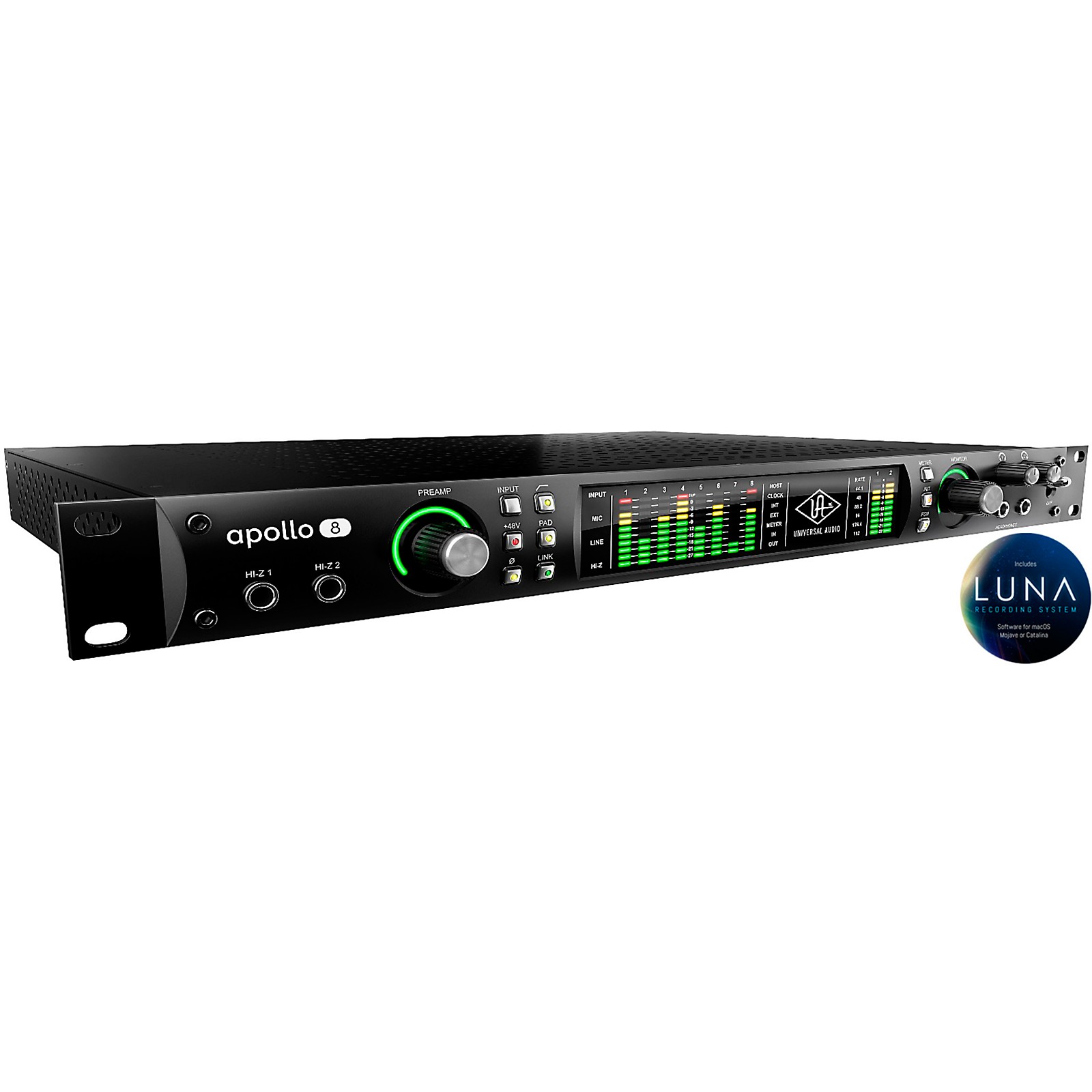 Apollo 8 is an elegant update to one of the world's most popular professional audio interfaces, delivering enhanced sound with the tone, feel, and fl...Click To Read More About This Product

Apollo 8 is an elegant update to one of the world's most popular professional audio interfaces, delivering enhanced sound with the tone, feel, and flow of analog recording. This 18 x 24 Thunderbolt interface features powerful UAD-2 QUAD processing, genuine UA analog design, and next-generation A/D and D/A conversion, putting class-leading audio quality in a sleek new package. Works with Mac or Windows.

Apollo 8 further distinguishes itself with Realtime UAD Processing and Unison technology, letting you record at near-zero latency through the full range of UAD plug-ins from Neve, Studer, Manley, Lexicon, and more ” including new mic preamp emulations from Neve, API and Universal Audio. Apollo Expanded software now allows cascading up to four Apollos in a single system over Thunderbolt (Mac), so you can scale up your studio as your needs grow.

Next-Generation Apollo A/D and D/A Conversion
Apollo 8 improves upon the original Apollo' gold-standard audio quality with completely redesigned, class-leading A/D and D/A conversion ” giving you increased dynamic range and even lower THD. This results in breathtaking clarity, depth, and accuracy in your recordings, from tracking and overdubbing, to mixing and mastering.

The Apollo 8' bundled œRealtime Analog Classics Plus suite of UAD plug-ins gives you the UA 610-B Tube Preamp & EQ, Raw Distortion, Softube Amp Rooms, legacy LA-2A, 1176, and Fairchild compressors, Pultec EQs, and more, so you have a rack full of bonafide audio classics, right out of the box. Using Apollo, UAD plug-ins are also available during mixing and mastering, putting UAD plug-ins (VST, RTAS, AU, AAX 64) at your disposal throughout the creative process.

Based on unprecedented hardware-software integration between Apollo' mic preamps and its onboard UAD plug-in processing, Unison lets you record through stunning emulations like the bundled UA 610-B Tube Preamp plug-in, or exclusive preamp emulations from API and Neve. Unison technology is further enhanced in Apollo 8 to include its panel Hi-Z instrument inputs, giving you dead-on impedance and gain matching for new stompbox models.

With Apollo 8' Console 2.0 application ” a complete re-imagining of Apollo' original Console software ” you can take advantage of over 25 user-requested features such as Channel Strip presets, Drag & Drop functionality, dynamically resizable windows, and more.

Improved Monitoring and Workflow
Apollo 8 features a host of front-panel upgrades over the original Apollo, including Alt Speakers, Dim, and Mono functions as well as input and output metering capabilities via the new Meter button. These features combine with Apollo' system scalability to make it the new standard in professional multi-channel audio recording.

*All trademarks are recognized as property of their respective owners. Individual UAD Powered Plug-Ins sold separately.