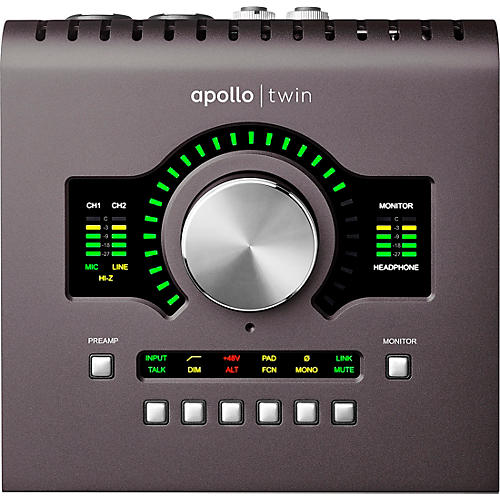 Join For Free
Share your location Order within 7 hrs 48 mins. 12 secs.
In Stock & Ready to Ship Orders placed before 3 p.m. ET usually ship the same business day (except weekends and holidays).
Ship to
Please enter 5 digits
Free Shipping Shipping and Delivery Times If we promise a delivery date and a delivery attempt is not made by this date, we will provide a refund of any shipping fees associated with your order. Questions? Call 800-449-9128
site1skuL81210000000000 true MFI=18 true Change Location

An audio interface with near-zero latency and next-generation conversion.

Users of Apollo Twin MkII can combine up to four Thunderbolt Apollos and six total UAD-2 devices—adding I/O and DSP as your studio grows. Once you expand your studio with additional Apollo rackmount units, you can use Apollo MkII as a desktop monitor control while still tapping its additional I/O and DSP power.

Get Legendary UA Sound Natively With UAD Spark
Apollo Heritage Editions include plug-ins featured in UAD Spark, UA’s subscription plug-in collection that runs natively on Mac, with no UA hardware required. With UAD Spark, you can expand your plug-in processing power, balancing your DSP load between Apollo and your computer’s onboard processing.