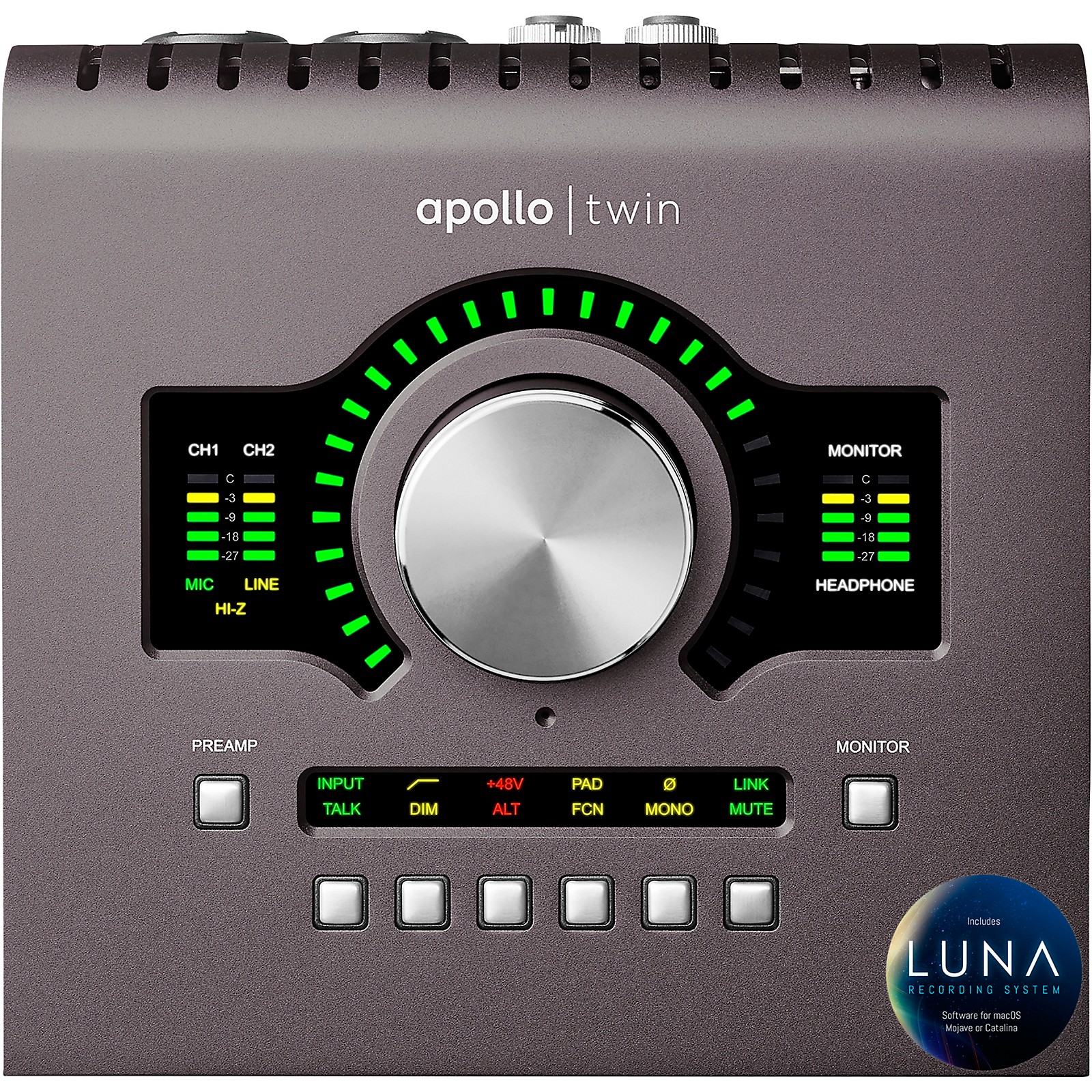 The next-generation Apollo Twin Series is a ground-up redesign of the original — delivering enhanced audio conversion with the tone, feel and flow of...Click To Read More About This Product

The next-generation Apollo Twin Series is a ground-up redesign of the original — delivering enhanced audio conversion with the tone, feel and flow of analog recording. Apollo Twin MkII improves upon the original Apollo Twin’s gold-standard audio quality with completely redesigned A/D and D/A conversion. Available with a choice of UAD-2 QUAD, DUO, or SOLO Core processing onboard, Apollo Twin lets you record through the full range of UAD Powered Plug-ins — including Marshall Classic, Ampeg Classic, and analog emulations of iconic vintage recording gear.

Realtime UAD-2 Processing — a Studio Full of Analog Sounds
Building upon the Apollo tradition, Apollo Twin MkII opens up a range of classic analog tones and color via its Realtime UAD Processing. Available with a choice of UAD-2 QUAD, DUO, or SOLO Core processing onboard, Apollo Twin lets you record through the full range of UAD Powered Plug-Ins — at near-zero latency. Right out of the box, the Apollo Twin MkII includes the “ Realtime Analog Classics” suite of UAD plug-ins — the UA 610-B Tube Preamp & EQ, Raw Distortion, Softube Amp Rooms, legacy LA-2A and 1176LN compressors, Pultec EQs, and more — so you have a rack full of bonafide audio classics already onboard. Unlike competing interfaces, the Apollo Twin MkII powers UAD plug-ins inside all major DAWs for mixing and mastering (VST, RTAS, AU, AAX 64 format), greatly offloading the processing required from your host Mac or PC.

Available with UAD-2 QUAD, DUO, and SOLO Core Processing
In addition to the popular UAD-2 SOLO and DUO Core models, Apollo Twin MkII is available in an ultra-powerful UAD-2 QUAD Core model, allowing more plug-in horsepower for running the most complex and convincing analog emulations on the market.

Professional Performance and Scalability with Console 2
Users of Apollo Twin MkII can combine up to four Apollos and six total UAD-2 devices — adding I/O and DSP as your studio grows. Once you expand your studio with anApollo 8, 8p, or 16 rackmount unit, you can use Apollo Twin as a desktop monitor control while still tapping its additional I/O and DSP power.


Included as a free download with all UA Thunderbolt audio interfaces, the LUNA Recording System is designed to give Apollo owners the most natural, inspiring and analog-sounding music production environment available for Mac. This digital system integrates directly with the hardware to deliver analog sound and creative immediacy. It uses real-time processes more commonly associated with analog recording, versus typical digital audio workstation (DAW) workflows.

Deep Integration With the Apollo Interface


In addition to its seamless hardware-software integration with Apollo and Arrow, the LUNA Recording System allows capturing audio through DSP-powered UAD plug-ins with no discernible latency. The system also includes Accelerated Realtime Monitoring, which provides fast analog-style tracking and overdubbing workflows using Apollo’s onboard DSP acceleration. LUNA's deep Apollo integration will be a revelation for anyone who has not recorded music on a highly expensive, DSP-assisted recording system. LUNA makes music production feel more robust, dependable and intuitive, without latency and monitoring hassles.

Extensions Built Directly Into the Software


The LUNA system works with a variety of exclusive LUNA extensions, including two that come free with download. These are not plug-ins that require multiple instances and windows—they are controlled from within the app. The Oxide LUNA extension comes free with download and features multitrack tape emulation, bringing the warmth and punch of tape to any audio or instrument track. For those who want to delve deeper into magnetic tape sounds, there is the Studer A800 multichannel tape recorder extension (sold separately). Other available options include the Neve Summing extension, which recreates the audio summing circuitry of the Neve 80-Series audio mixing consoles designed by Neve Electronics in the 1960s and early 70s.

Other features include auto-saving, UAD and AU compatibility, auto-saving and AAF session imports from other DAWs. The LUNA system is free to all owners of Thunderbolt-equipped Universal Audio interfaces including Apollo and Arrow. It requires a modern Mac running macOS Mojave or later.
FEATURES

SPECIFICATIONS
Audio Quality Inputs Outputs Other Connectivity Onboard Features Other