Join For Free
Share your location Order within 7 hrs 48 mins. 12 secs.
In Stock & Ready to Ship Orders placed before 3 p.m. ET usually ship the same business day (except weekends and holidays).
Ship to
Please enter 5 digits
Free Shipping Shipping and Delivery Times If we promise a delivery date and a delivery attempt is not made by this date, we will provide a refund of any shipping fees associated with your order. Questions? Call 800-449-9128
site1skuJ06372000000000 true MFI=71 true Change Location 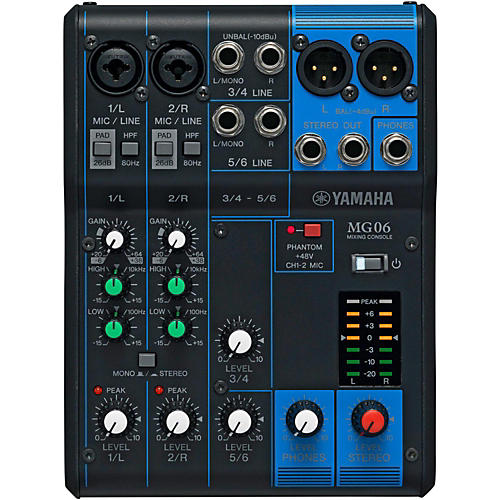 Now in its third incarnation, the MG Series embodies the pursuit of design excellence, and incorporates some of the same technologies developed for use in high-end professional consoles, including studio-quality preamps, powerful digital processing, and a rugged, reliable construction. The Yamaha MG06 is a six channel mixing console with two mic (XLR hybrid) and six Line Inputs (2 mono + 2 stereo), one Stereo Bus, and one AUX send.

Order today and have a low profile mixer with great sound.