Track your orderReturnsFAQsMake a card paymentWhy shop with us? RewardsBlogHelp
Call 800-449-9128 for phone-only deals - Get Details

Join For Free
Share your location Order within 7 hrs 48 mins. 12 secs.
In Stock & Ready to Ship Orders placed before 3 p.m. ET usually ship the same business day (except weekends and holidays).
Ship to
Please enter 5 digits
Free Shipping Shipping and Delivery Times If we promise a delivery date and a delivery attempt is not made by this date, we will provide a refund of any shipping fees associated with your order. Questions? Call 800-449-9128
site1skuJ24888000000000 true MFI=0 true Change Location 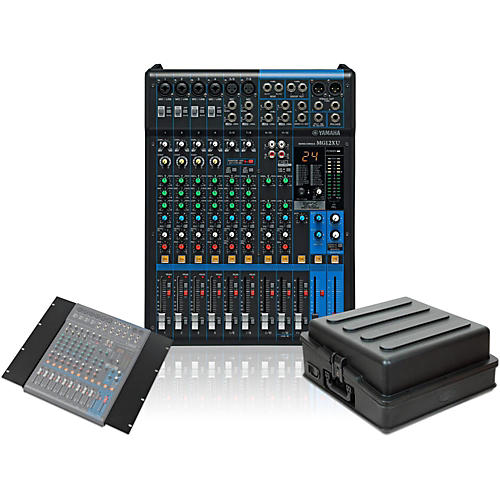 Protect your investment from the moment you get it. This kit pairs together the Yamaha MG12XU mixer, rackmount kit and a hardshell mixer case from SKB.

With an intuitive, easy-to-use interface, the MG XU Series boasts an extensive lineup of compact mixing consoles with models ranging from six to twenty channels, suitable for a diverse range of users and applications. For installed, recording, or live music settings, the solid construction and flexible design of these consoles lets you shape your sound with confidence, continually delivering peak performance and a level of sound quality and reliability unrivalled in its class.

1SKB-R10010U Slant Mixer Case With Hardshell Top
The 1SKB-R100 is a 10U slanted top rack mixer case that features steel threaded rails, a hard lid and a removable rear door for maximum access to the rack gear, side access ports (for cable routing) on each side with a comfortable rubber over-molded handle on each side for easy carrying.

The one-piece base is roto-molded of Linear Medium Density Polyethylene (LMDPE) while the hard cover and rear door are injection molded of Rubber Modified Styrene (RMS). Two TSA-locking SKB-patented trigger latches secure the lid while the flat hard top allows for stacking with the revised roto racks to create a modular solution for easy setup.

Order today and save.