Join For Free
Share your location Order within 7 hrs 48 mins. 12 secs.
In Stock & Ready to Ship Orders placed before 3 p.m. ET usually ship the same business day (except weekends and holidays).
Ship to
Please enter 5 digits
Free Shipping Shipping and Delivery Times If we promise a delivery date and a delivery attempt is not made by this date, we will provide a refund of any shipping fees associated with your order. Questions? Call 800-449-9128
site1skuL68667000000000 true 914=0;MFI=645 true Change Location 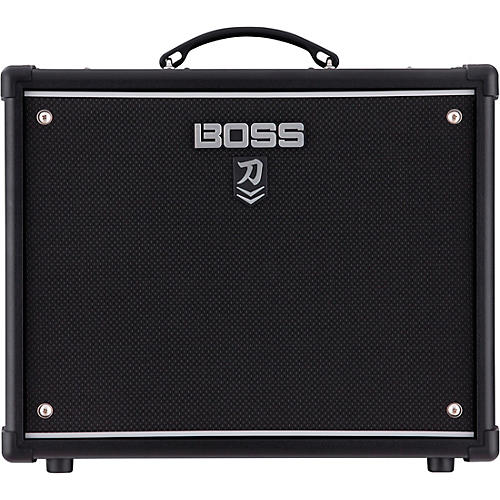 Power-Amp Input to Rock Your Rig
The Katana-50 MkII rocks as a standalone amp, but it also excels as a powered cabinet for your favorite preamp, modeler, or multi-effects unit. Connecting to the rear-panel Power Amp In jack bypasses Katana MKII’s preamp and effects, letting you tap straight into the Tube Logic power section, complete with grab-and-go Power Control. And with BOSS Tone Studio, the input can be easily optimized for your particular gear with a high-pass filter and adjustable gain.

One-Touch Recall of Custom Setups
One of the Katana-50 MkII' most powerful features is the ability to store favorite amp character and effects setups in Tone Setting memories for instant recall. After you’ve dialed in a sound with the panel controls, simply save it to the desired memory with a quick button hold. Eight Tone Settings (two banks of four) are available, with fast selection right from the panel. And for hands-free operation on the gig, just connect external footswitches.

Ready-to-Mix Direct Tones
Beyond the incredible amount of possibilities with tone, the Katana-50 MkII offers a wealth of I/O options. It features line, USB, and phones/recording outputs with miked-cabinet emulation, letting you send mix-ready amp tones to a PA system, computer DAW, or headphones. The direct sound can be shaped with three different Air Feel settings, which are accessible from BOSS Tone Studio. Two-channel USB operation is supported, allowing you to track in true stereo with many of Katana’s modulation, EQ, delay, and reverb effects.

Ultimate Control at Your Feet
The optional GA-FC foot controller is the perfect partner for the Katana-50 MkII. It connects with a single cable, requires no external power, and features a slim, rugged profile that takes up minimal space. With six footswitches, you’re able to recall Tone Settings, turn effects on/off, and tap in tempos. Two expression pedals can also be connected, providing foot control of volume, Pedal FX, and up to three assignable parameters (configurable in BOSS Tone Studio).