Join For Free
Share your location Order within 7 hrs 48 mins. 12 secs.
In Stock & Ready to Ship Orders placed before 3 p.m. ET usually ship the same business day (except weekends and holidays).
Ship to
Please enter 5 digits
Free Shipping Shipping and Delivery Times If we promise a delivery date and a delivery attempt is not made by this date, we will provide a refund of any shipping fees associated with your order. Questions? Call 800-449-9128
site1skuJ18317000000000 true MFI=0 true Change Location 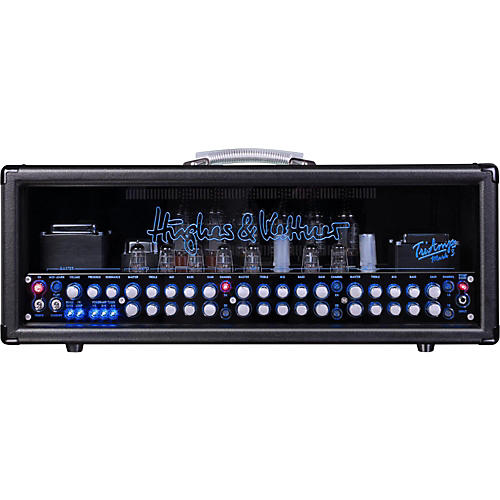 Hughes & Kettner's TriAmp Mark 3 delivers brutal tonal intensity, with more sheer energy bubbling under your fingertips than you've ever experienced before. This is what you get when 30 years of tube amp expertise combine with an absolute freedom of engineering. The result is an amp boasting a range of professional sounds not offered by any other amp anywhere on the planet.

TriAmp Mark 3's six monster channels are powered by three completely independent preamps and three freely assignable power amps using Threedom Power Amp Technology. This means that - for the first time ever - you can play through a custom tailored tube power amp on each and every one of up to 128 MIDI-controlled sound presets.

TriAmp Mark 3 leaves the Hughes & Kettner factory in St. Wendel, Germany equipped with two pairs of 6L6 power tubes, and one pair of EL34s - but it works equally well with other tube types, like 5881s or KT88s. Imagine what this could do for your trademark sounds...All this gives you 42 base sounds onstage, 84 if you add the Stomp Boost - but that's still not everything.

TriAmp Mark 3 also features the Red Box AE DI output - which makes performing onstage and in the studio easier than it's ever been - and TSC (Tube Safety Control) which automatically and constantly keeps your tubes in good health. Best of all, TriAmp Mark 3's breathtaking versatility and inspirational tonality is matched only by its ease and joy of use.

TriAmp Mark 3 - A new chapter in the epic tale of tube driven tone
Taking the TriAmp Mark 2 a major step forward was a challenge. It meant creating something radically new - so new, that it will redefine the status quo in tone, performance and design. At the same time, however, a Mark 3 has to be a continuation, to look and feel familiar to its predecessors. With that in mind, Herr Kettner considered every single part that made the Mark 2 the amp of choice for many artists, re-engineered every single feature in the most forward-thinking way, and created something genuinely new that no one has ever dreamed of before. Something new, that really makes a difference.

Built for creative expression on an epic level
Not only does it offer three completely different preamps, but it offers three truly independent power amps. Each of the three pairs of power amp tubes can be equipped with EL34s or 6L6s, and each of the pairs is freely assignable to each of the 6 channels - even via MIDI! But you're not just limited to one pair per channel - you can assign two pairs to each, which allows you to mix the different types of power amp tubes. And, if you like, you can even add the third pair of tubes into the equation, for a total of up to 150 watts of
sheer tube power.

Tonal variety accessible in an inspiring way
Each of the six channels has its own Gain, Volume and 3-band EQ, plus a Stomp Boost that is tailored specifically to each channel's character. This makes a total of 12 different base tones at the touch of a button. Now combine this with three pairs of power amp tubes - again all accessible at a touch of a button - and you've got 3x12=36 different sounds available at 50 watts. If you kick in a second pair of tubes (taking the power up to 100 watts), you get another 36 combinations (Pair 1+2, Pair 1+3, Pair 2+3). With the third pair
engaged too (that's now 120 watts), you've got another 12 options. That's a total of 84 different sounds.

What is really radically new here is how you can unleash your creative expression
Imagine yourself playing with a '60s Brit Pop Clean tone with a pair of EL34s, and then adding some American Sparkle to your sound just by switching to a pair of EL6L6s. Or imagine you're playing a modern American High Gain sound with two pairs of 6L6s and you add anaggressive mid-punch to the mix - just by kicking in a pair of EL34s. The TriAmp Mark 3 does not just offer six classic tones. The options to combine channels and poweramp tubes like never before let you create the sound of the future. All at a touch of a button, and all at the highest possible levels of quality and tone.

Add this special head to your setup and enjoy the great tone. Order today!