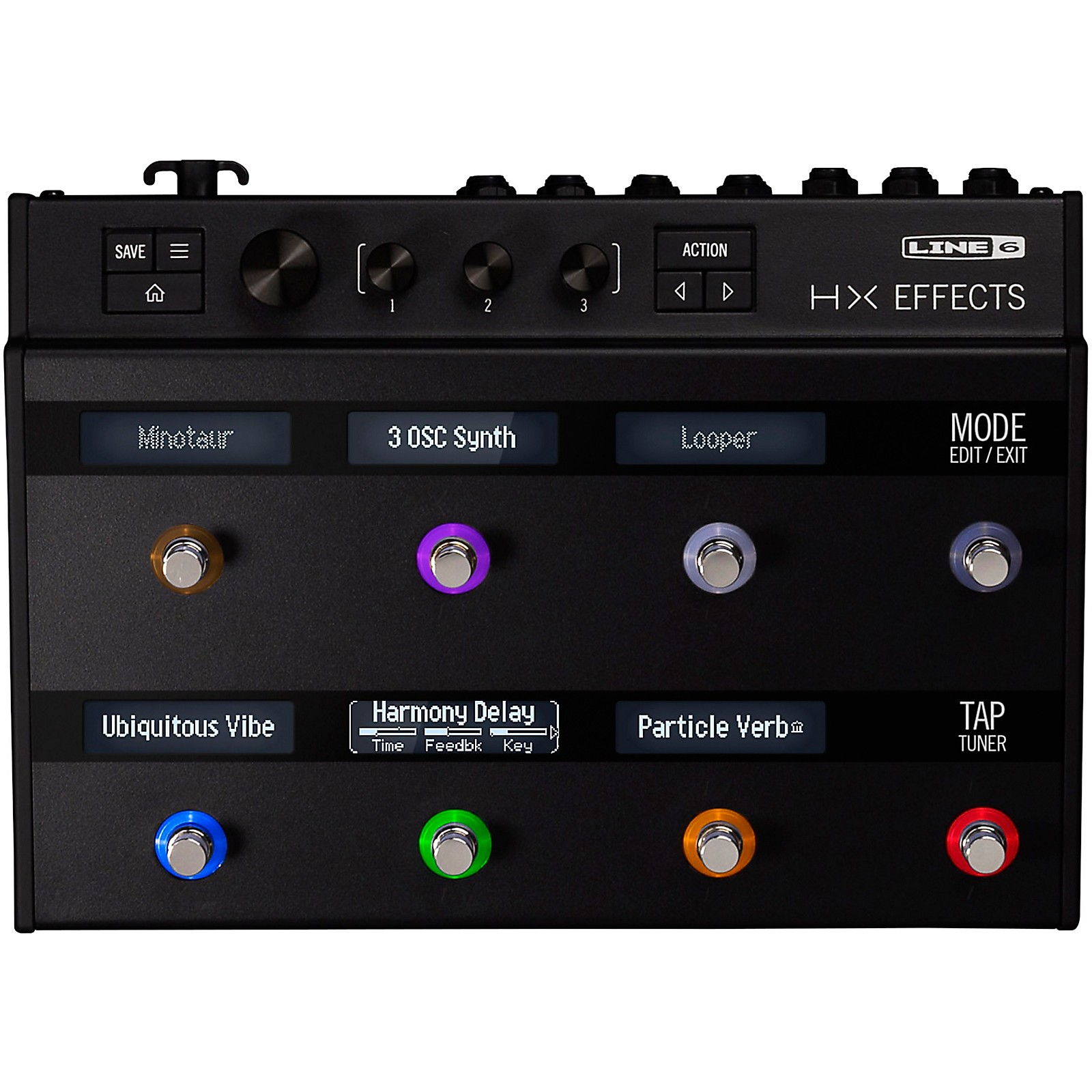 HX Effects from Line 6 is the answer for players who want the massive effects arsenal of the Helix processor lineup, but want it all in a pedalboard-...Click To Read More About This Product

Get a wealth of high-quality Helix tones from a compact format.

HX Effects from Line 6 is the answer for players who want the massive effects arsenal of the Helix processor lineup, but want it all in a pedalboard-friendly format. It offers more than 100 effects that range from subtle color to wild madness, with up to nine running at the same time. It even includes M-Series and Stompbox Modeler pedals in its lightweight, sturdy build.

It features eight capacitive-sensing footswitches with six scribble strip LCDs and color-coded LED rings, so its easy to assign and keep track of your effects. Simply touch a footswitch with your finger to instantly jump to any effect, quickly adjust a parameter, or assign controllers. HX Effects also offers a choice of true analog bypass or DSP bypass with trails, and 123dB of dynamic range.

Modeling Vintage Effects Behaviors
HX Effects accurately recreates vintage effects by modeling their individual components. For example, the Transtronic process emulates the unique behavior of multiple germanium and silicon components, making it possible to authentically recreate fuzz, distortion and more. And the Throbber is a “virtual lightbulb” that mimics the nonlinear behavior of the small incandescent bulb and four photocells inside the original Shin-ei Uni-Vibe pedals.

Stereo Throughput
True stereo throughput maintains the integrity of stereo signals from inputs to outputs, while selectable true analog bypass switching ensures nothing gets between you and your tone. That means you'll have more effects options, multiple-amp versatility and more.

A Wealth of Routing Options
HX Effects is easily integrated into existing pedalboard and studio rigs thanks to robust routing and control options, including parallel stereo signal paths, two assignable effects loops (stereo linkable), two expression pedal inputs and up to four amp switching outputs. A switchable line-level input enables keyboardists, DJs, and producers to connect electronic instruments or use HX Effects as an “outboard” effects processor in the studio.

Ultimate Control at Your Feet
Like the Helix lineup, HX Effects can act as a command center for an entire amp and pedal rig—enabling amp switching, control of other MIDI-equipped pedals and more. A switchable line-level input enables keyboardists, DJs and producers to connect electronic instruments or use HX Effects as an effects processor in the studio. Real-time MIDI control enables you to send MIDI command and controller messages to other devices.