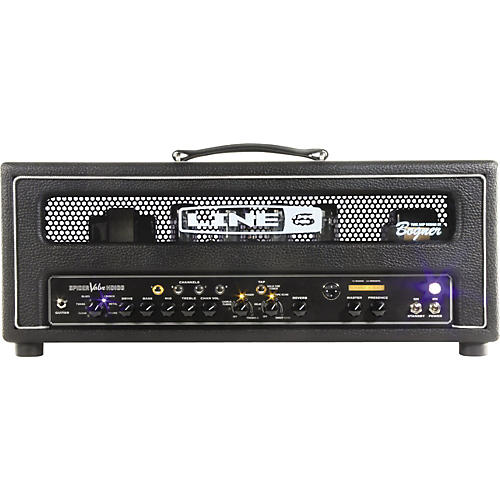 The Spider Valve amp head delivers 12 channels of amp modeling - combined with several flavors of built-in modulation, delay and reverb ” driven by a...Click To Read More About This Product

Amp modeling and digital effects in a classic tube amp.

Spider Valve is the result of a groundbreaking collaboration between Line 6 and Reinhold Bogner fusing the versatility of modeling with the performance and feel of a world-class tube amplifier.

Combining the performance, response and feel of a well crafted tube amp with the inspiring capabilities of amp and effect modeling - the Spider Valve amplifier delivers the best of both worlds.

Modeling + Tubes
The Spider Valve design combines 12AX7 preamp tubes with Line 6's signature modeling front-end, a marriage that allows each part of the sonic equation to deliver what it does best: creamy, cascading distortion and enriched harmonics from the tubes, and 12 of the world's finest amp models and seven stunning effects from the modeling front end. And, of course, perfectly matched 6L6 power tubes driving Celestion Vintage 30 speakers to deliver unprecedented sonic impact and spatial imaging.

With the simple front-end controls and display, programmable patches and presets are instantly within reach. Tweak your tone even further with the front panel Presence, Drive, Bass, Mid and Treble controls: this is a true-blue tube amp, and it acts like one, responding and delivering all the analog detail, performance and warmth of every amp model and effect.

Unleash your effects arsenal.
From the DL4 stompbox to the Echo Farm plug-in, Line 6 effects have achieved cult status in top studios and stage rigs of discerning guitarists. With Spider Valve, Line 6 delivers a palette of top grade integrated effects - easily accessed and tweaked from the front panel using the SmartControl FX knobs.

Modulation
A choice of phaser, chorus or tremolo lets you tweak your tone from rich luscious modulations to dramatic orbital gyrations.

Delay
From the swirling feedback of the sweep echo to the organic decay of the tape echo, Spider Valve delays provide an unmatched level of dimension and depth.

Reverb
The Spider Valve effects arsenal is complete with a dedicated reverb control ” allowing you to dial in anything from subtle ambiences to cavernous spaces.

The Bogner Story
Reinhold Bogner, the principal designer at Bogner Amplification, had been designing and building amplifiers long before leaving Germany in 1989. Moving to Los Angeles he quickly gained the trust of many influential players including Steve Stevens, Dan Huff, Allan Holdsworth, Mike Landau and Steve Vai who sought out his skill at modifying and custom building their amps.

But it was overhauling and revitalizing Eddie Van Halen's legendary 1968 Marshall Plexi in 1992 that propelled Bogner to legendary status and inspired him to launch his own high-end amp company, Bogner Amplification. Acclaimed for their rich, robust tones, channel-switching sophistication and sonic versatility - Bogner amps have earned a maniacally devoted following among discerning guitarists such as Jerry Cantrell, Lyle Workman, Wes Borland, Chris DeGarmo, Keith Urban, Richie Sambora and many others.

Using only premium components - in tandem with a level of craftsmanship that can only be referred to as "artistry"- Bogner amplifiers more than deserve their exalted reputation. Ever the restless creator, Bogner brought those same priorities, standards and sensibilities to bear on the Spider Valve design. Each Spider Valve amp--the 112, 212 and HD100-- combines the talent and experience of Bogner, arguably the tube world's leading light, with the know-how and technological savvy of the world's leader in modeling, Line 6.

* All product names used in this webpage are trademarks of their respective owners, which are in no way associated or affiliated with Line 6. These trademarks of other manufacturers are used solely to identify the products of those manufacturers whose tones and sounds were studied during Line 6's sound model development.