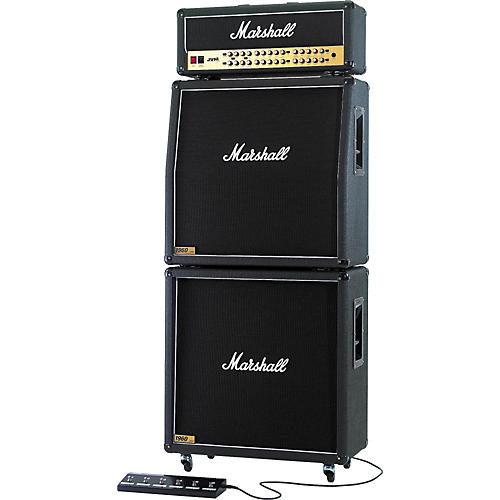 This Marshall full stack includes one JVM410H Tube Amp Head and a 1960A angled cab with a 1960B straight cab for some serious stage presence.

In a nutshell, the Marshall all-valve, 4-channel JVM410H 100-Watt tube head is the most versatile Marshall amplifier ever made. It also boasts more gain than any other Marshall to date--and that's really saying something!

Each of its 4 channels - Clean, Crunch, OD1 & OD2 - are not only completely independent of each other, they all boast 3 Modes, all 12 of which are footswitchable and feature their own unique gain structure. It makes the JVM 4-channel effectively 12 Marshalls in one!

The JVM410H amp head has studio-quality digital reverb with a level control for each channel. This is also footswitchable, as are the amp's two Master Volume controls and the Series/Parallel effects loop. Resonance and Presence are equipped with master controls.

Even though the head and combo both house 28 controls and 8 LED switches on their front panels, they're incredibly simple to understand because of the extremely logical layout. Each of the 4 channels has the usual suspects when it comes to controls - Volume, Bass, Middle, Treble & Gain--accounting for 20 of the 28 controls right away. Take away the 4 reverb controls and you're only left with 4 Master controls--2 Master Volumes plus Resonance & Presence.

Add to this an ingenious footswitch (UK patent pending) and the fact all the amp's switching (channel/modes, Reverb, Master Volume selection, FX loop) can be done via MIDI and you're looking at an incredibly flexible amp! The 6-way footswitch boasts 7 LEDs and memory, plus it connects to the amp via a regular guitar cable.

From the cleanest clean to the filthiest distortion ever found in a Marshall and all points in-between, the JVM410H all-valve amp head will give you whatever tone you need right when you need it.

1960A and 1960B 300W 4x12 Guitar Extension Cabinet
The Marshall 1960 Speaker Cabinet puts out beautiful tone at any volume. The addition of an impedance (4 or 16 ohm) mono/stereo switching mechanism has transformed the "industry standard" 1960 into the ultimate speaker cab. These 280W Marshall cabs are loaded with Celestion Vintage speakers. The bottom cabinet is traditionally square-shaped with casters while the top speaker has an angled front.

Get a start on a super stack. Order today.

JVM410 Head with 1960A and 1960B Tube Guitar Full Stack Regular Specifications: