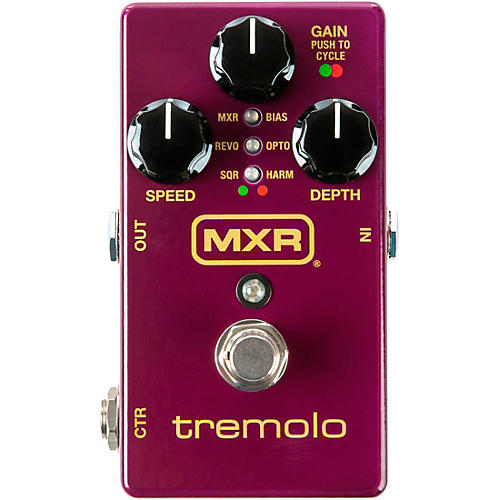 Join For Free
Share your location Order within 7 hrs 48 mins. 12 secs.
In Stock & Ready to Ship Orders placed before 3 p.m. ET usually ship the same business day (except weekends and holidays).
Ship to
Please enter 5 digits
Free Shipping Shipping and Delivery Times If we promise a delivery date and a delivery attempt is not made by this date, we will provide a refund of any shipping fees associated with your order. Questions? Call 800-449-9128
site1skuL78858000001000 true true Change Location

The MXR Tremolo gives you all the most beloved tremolo sounds in a single pedal.

The return of the MXR Tremolo Effect pedal combines a full historical range of masterfully tuned tremolo styles with a host of features to satisfy the performance needs of today’s discerning players. The MXR Tremolo’s six tremolo waveforms represent classic and iconic sources of the effect, as well as new sounds concocted by the MXR design team.

Getting incredible sounds from the MXR Tremolo right out of the box is simple. Speed, Gain and Depth controls set the rate, volume and intensity of the selected tremolo effect, and cycling through the six styles is as simple as pushing the Gain knob. For advanced technicians of tone, a bevy of features await—from stereo operation to tap tempo and expression pedal functionality to envelope tremolo, which makes the response of the effect sensitive to your attack.

These and other features come in a single MXR housing so that you can put a wide variety of intriguing, well-crafted tremolo waveforms on your board with no overcrowding.

Get a variety of tremolo sounds without overcrowding your pedalboard. Order today.