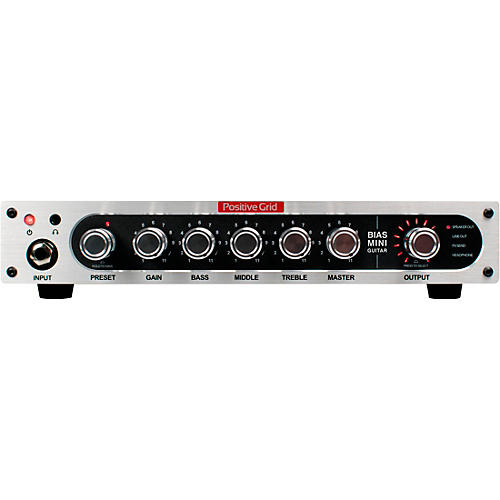 Join For Free
Share your location Order within 7 hrs 48 mins. 12 secs.
In Stock & Ready to Ship Orders placed before 3 p.m. ET usually ship the same business day (except weekends and holidays).
Ship to
Please enter 5 digits
Free Shipping Shipping and Delivery Times If we promise a delivery date and a delivery attempt is not made by this date, we will provide a refund of any shipping fees associated with your order. Questions? Call 800-449-9128
site1skuL25380000000000 true MFI=0 true Change Location

Get stage-ready power and a wealth of awesome tones in a super-portable head.

Weighing just over five pounds with a built-in 300-watt power amp, nothing else on the planet comes close to BIAS MINI for small-to-medium sized gigs and recording sessions.

Easy to Use
Take one look at the front panel of BIAS MINI and you’ll feel right at home, because the knobs do what you expect them to. Call up one of the 16 onboard presets and tweak the Gain, Bass, Mid, Treble, and Master just like you’d expect to on a normal tube head, push the Output button to cycle through controls for the amp, headphone and line outputs, and then get back to playing.

Small Size, Huge Tone
In the past, good tone was both expensive and heavy, but BIAS MINI turns that notion on its head. With a built-in power amp rated at 300 watts @ 4 ohms, there’s plenty of power on tap for medium-sized gigs and recording sessions, and at just over 5 pounds in a half-rack enclosure, there’s no longer any excuse not to take your favorite tones on the road with you wherever you go. Add to that a glitchless effects loop for your favorite effects and the ability to take pedals like a champ, and BIAS MINI makes the impossible possible.

Powerful Software
If you want to dive headlong into the world of amp customization, BIAS MINI comes with Positive Grid's amazing BIAS AMP Pro amp designer software ($199 value), which allows you to recreate the sound and feel of nearly any existing amplifier. Even better, it gives you the power to create an entirely new amp that is unique to you and the way YOU play. Connect via built-in Bluetooth or USB, and open up a world of component options previously only available with a soldering iron: choose between different preamp and power amp circuits, change the tubes and transformers, add clipping diodes and try out different rectifiers—all completely authentic and all in real time. It’s like having a boutique amplifier workshop at your fingertips.

Connect to the Cloud
All BIAS products can connect to the Positive Grid ToneCloud, a cloud-based community the engineers created specifically for guitarists and musicians. It’s much more than just an online storage tank for sounds—it’s a place to discover new ideas and new tones. You can download new amps created by artists and recording studios, backup and share your own creations with other guitarists in the community and interact with other musicians with similar interests. BIAS AMP software features the ability to Amp Match, analyzing a source guitar tone and applying the necessary corrective processing to make a custom amp more closely match the original. Even if you don’t plan on matching amps yourself, you can still take advantage of the Tone Match feature by downloading custom amps other guitarists have matched from the ToneCloud.