Join For Free
Share your location Order within 7 hrs 48 mins. 12 secs.
In Stock & Ready to Ship Orders placed before 3 p.m. ET usually ship the same business day (except weekends and holidays).
Ship to
Please enter 5 digits
Free Shipping Shipping and Delivery Times If we promise a delivery date and a delivery attempt is not made by this date, we will provide a refund of any shipping fees associated with your order. Questions? Call 800-449-9128
site1skuL30319000000000 true MFI=0 true Change Location 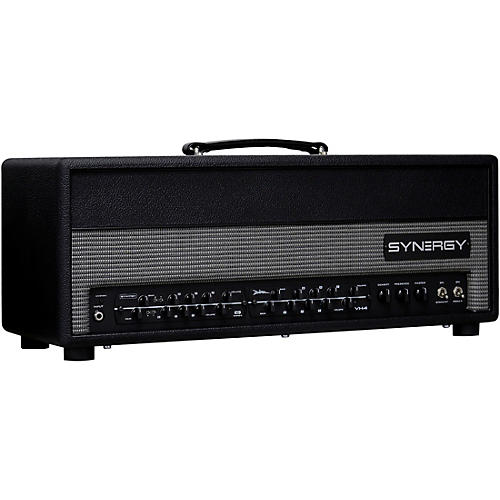 Get awesome tube tone and amazing versatility with the ability to swap preamps.

If you want the power of the Synergy platform but prefer to stay with a straightforward, tube amp-based rig, the Synergy SYN-50 Dual Module 50W all-tube head is for you. Based around a 6L6 power section, the SYN-50 is capable of singing with the best amps out there. The head boasts docks for two of Synergy preamp modules, adding up to four footswitchable channels that have been voiced by some of the most legendary amp designers in the business. And while the SYN-50 is as easy to use as any amp head, it boasts immaculate cabinet simulated direct output, MIDI programming, and a transparent effects loop that makes it as useful in the home studio as it is screaming through an arena.

50 watts of all-tube power
There's simply nothing like the feeling and sound of a tube amplifier moving air behind you. That's why the engineers put Synergy preamp module technology into the 50-watt, all-tube SYN-50 amp head. With docks for two Synergy preamp modules, you're able to outfit this head with four channels of boutique-quality tone. And while the three 12AX7s and a 6L6-based power section push the sound of the modules through your favorite cabinet, the amp’s global Presence, Density, and Master controls shape its overall character. The SYN-50 brings together classic tube amp performance with the modern flexibility you demand.

A new standard in tonal flexibility
With two docks for Synergy preamp modules, the SYN-50 tube amp head offers up to four programmable channels that can be selected on the fly. Try the T/DLX and Diezel VH4 modules to go from California cleans to ferocious high-gain. Or maybe you'd prefer to pair the Morgan AC and Friedman BE modules for various shades of British-style chime and crunch. And swapping the modules couldn't be easier. Simply loosen the thumbscrews and change out the module for a different tone. With the SYN-50, you'll have the power and tones of Friedman, Morgan, Soldano, and more at your beck and call.

Powerful switching options
With so much tonal power and so many sonic options onboard the SYN-50, the engineers made sure to offer you two flexible ways to control it. The Synergy 4F 4-button foot controller is essentially a fully programmable MIDI controller. From the factory, the four buttons recall the channels on your preamp modules. But with a simple procedure, you're able to program the pedal to your needs. If that still isn't enough, the Dual Module 50W All-tube Head is fully MIDI capable. And because it accepts both 5- and 7- pin connectors, it works with almost every MIDI controller out there.