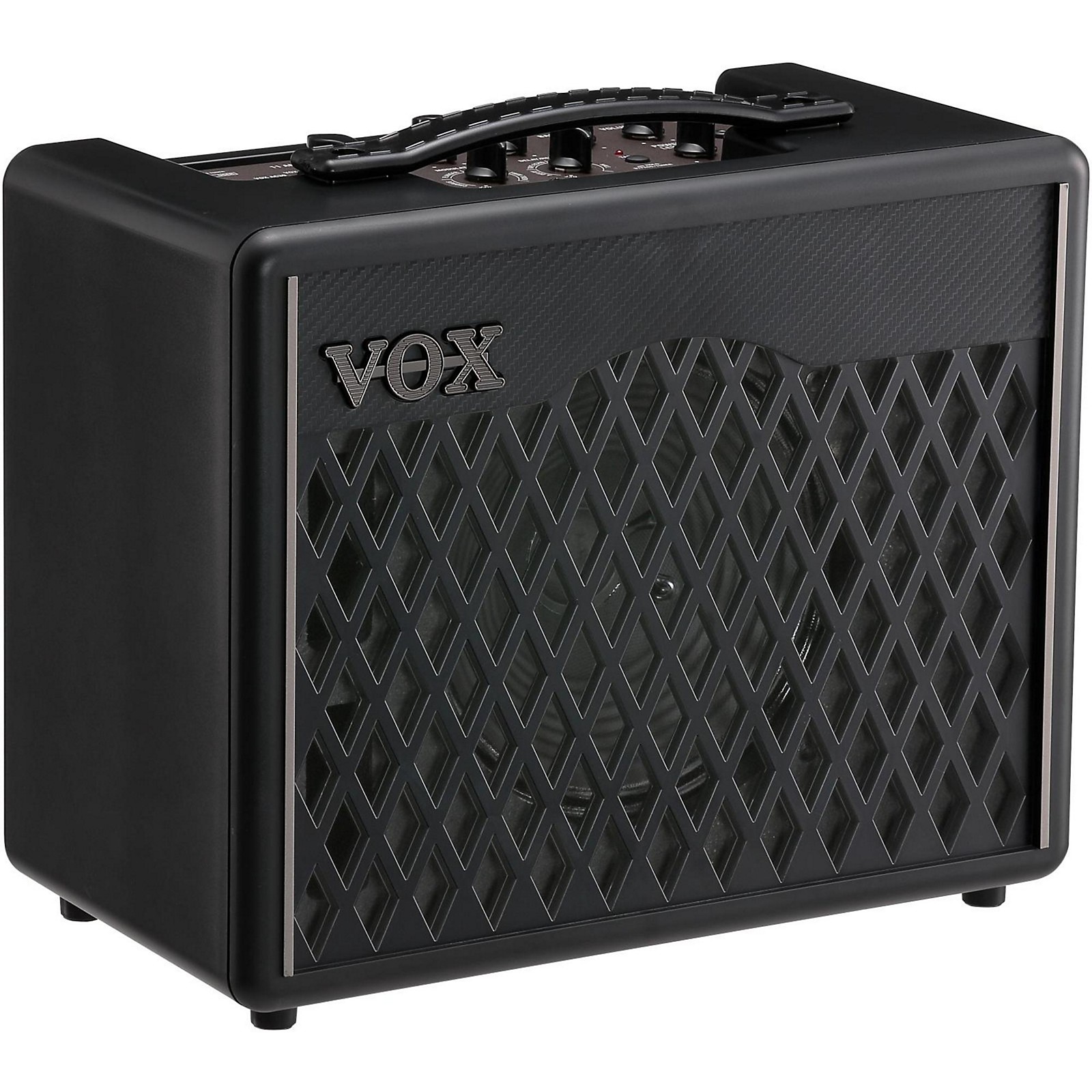 In the 20 years since modeling amps were introduced to the world, their sound quality has advanced dramatically thanks to the progression of digital ...Click To Read More About This Product

Experience the future of amp modeling with this 30W 1x8" combo.

Update Required To play the media you will need to either update your browser to a recent version or update your Flash plugin.

In the 20 years since modeling amps were introduced to the world, their sound quality has advanced dramatically thanks to the progression of digital technology. Today, along with tube amps and transistor amps, modeling amps have earned a firm position among the amps chosen by guitarists. When Vox began work on the VX I and VX II, they had come to the conclusion that conventional modeling methods had been already been exhausted and could be taken no further.

In order to achieve advanced sound, a new method was developed. This innovative new method, known as VET (Virtual Element Technology), models the actual circuits and electrical components of an amplifier. This more sophisticated approach to modeling results in a more accurate and more articulate representation of the desired amplifier. Taking this process one step further, Vox also reengineered the conventional guitar cabinet, opting for a one-piece, sealed enclosure that enhances the sound quality and performance of the VX amplifier range.

The circuits at work in the VX I and VX II offer guitarists the best of both digital and analog amplifier design. The Virtual Element Technology at the heart of these amplifiers unlike any technology ever seen in guitar amplification is represents an evolutionary step for modeling amplifier technology.

New VET (Virtual Element Technology) modeling technology
This technology is referred to as ‚Äúmodeling‚Äù because it is based on the existence of an original amplifier. In the case of rare vintage amps, it is not unusual for individual units of the same model to sound different due to the passage of time and the varying environments in which they have been used. For these reasons, the selection of the original amp has a major influence on the accuracy and sound quality of a modeling amp. Since the analysis is based on the output sound, the condition of the amp is also very influential, and the unavoidable reliance on the human ear has an even greater effect. These factors make it difficult to say that the modeling accuracy extends to the tonal changes arising from the interaction between the tone controls, the volume, and the various components.

In order to resolve these issues, we completely rethought previous methods of modeling for the VX I and VX II. This led to the development of VET (Virtual Element Technology), which models the actual circuit of the original amp. An enormous amount of information about the vacuum tubes and each individual component was carefully analyzed in order to accurately reproduce the characteristics of the desired amplifier, as they were originally intended.

A diverse array of amps and effects allows for comprehensive sound-shaping
The eleven built-in amp models include VOX‚Äôs legendary AC30 as well as also several high-gain, crunch, and clean sounds. A VX amplifier is the one unit you need to achieve a variety of coveted amplifier sounds ranging from classic vintage effects to costly boutique amps. A full complement of effects is also provided, including four types of modulation and four types of delay/reverb. The effects featured in the VX amplifier range have been also been reengineered to deliver more accurate and articulate tones. The eleven preset programs take full advantage of these amps and effects to simulate the signature sounds of famous guitarists and classic songs.

A redesigned power amp stage, complete with an FET equipped analog circuit
Responsiveness, dynamic overdrive, and incredible sound quality ‚Äî for the guitarist, these are the unique attractions of a tube amp, and are the reason that tube amps have continued to be sought by guitarists for decades. These characteristics are significantly influenced by the power amp stage of the amplifier. A new, FET-based analog power amp was designed specifically for the VX I and VX II to accurately reproduce the characteristics of a tube amp. This power amp design employs technology inherited from the Valvetronix series and succeeds in reproducing the distinctive sag of a classic tube amp.

Unique bass-reflex design and sealed cabinet produce a rich low-end
In addition to the circuit design, Vox considered all aspects that impact the sound, paying careful consideration to the cabinet and speaker design.

In order to obtain a more authentic sound and produce sound more efficiently, Vox employed a uniquely designed-bass reflex structure in conjunction with a sealed, one-piece speaker enclosure. While providing an external appearance appropriate for a guitar amp, the cabinet's shape, the curvature of the front and back surfaces, and the internal reinforcement ribs have all been carefully designed to optimize the resonance. A conventional wooden baffle was chosen to retain the projection and tone of a classic guitar amp, while the cabinet is constructed from lightweight and durable ABS. The combination of these two materials yields a superior acoustical property that sounds superb yet retains easy portability. All of these unique elements work together to bring forth a level of sound quality that was previously unachievable with an amp of this class.

The VX II comes equipped with a USB port and JamVOX III
The VX II is equipped with a USB port for simple integration with your PC or Mac and also comes bundled with our JamVOX III modeling software. ASIO driver support is also provided, allowing you to not only interact with JamVOX III, but also to interface with your favorite DAW or guitar amp simulator. An additional editor application is also provided which allows for simple storage and editing of your favorite sounds on your PC, Mac, or iOS device!