Join For Free
Share your location Order within 7 hrs 48 mins. 12 secs.
In Stock & Ready to Ship Orders placed before 3 p.m. ET usually ship the same business day (except weekends and holidays).
Ship to
Please enter 5 digits
Free Shipping Shipping and Delivery Times If we promise a delivery date and a delivery attempt is not made by this date, we will provide a refund of any shipping fees associated with your order. Questions? Call 800-449-9128
site1sku491397000104000 false true Change Location 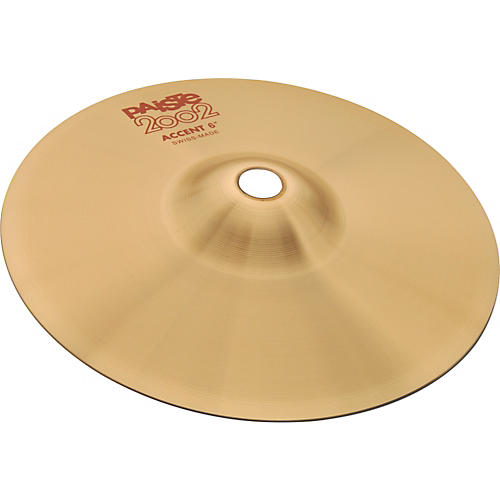 Nice way to add color to your set's tone. From the line developed in the early 70s specifically for amplified music.

The Paiste 2002 Accent Cymbal sounds bright, brilliant, and warm. Narrow range, clean mix. Very responsive feel. Slightly shattering, explosive attack with warm, mellow bell-like fade. Features an exotic feeling, very dominant center tone with soft, swirling over- and undertones. In addition to use as accent cymbals, you could mount it upside down over a ride bell. A pair could also be used as very unusual mini hats.

Background: During the 1960's developing Beat and Rock music required cymbal sound to match the new frequencies and volume levels and in 1967 the Giant Beat series was created - The 2002 was developed in 1971 fusing the power of the Giant Beat with the differentiation of the Jazz series Formula 602 - In 2005, Paiste once again makes the 2002 a core series for the future, as the best and most innovative Dimensions models are incorporated into the newly expanded 2002, adding current trend cymbal sound to this venerable line

Users: Working Musicians, Enthusiasts - All players who need energy and drive and want their cymbals to cut through the music in all settings

Recognition: Used by countless top players worldwide over three decades to create a significant portion of our modern music heritage