Join For Free
Share your location Order within 7 hrs 48 mins. 12 secs.
In Stock & Ready to Ship Orders placed before 3 p.m. ET usually ship the same business day (except weekends and holidays).
Ship to
Please enter 5 digits
Free Shipping Shipping and Delivery Times If we promise a delivery date and a delivery attempt is not made by this date, we will provide a refund of any shipping fees associated with your order. Questions? Call 800-449-9128
site1sku491419000081000 false MFI=0 true Change Location 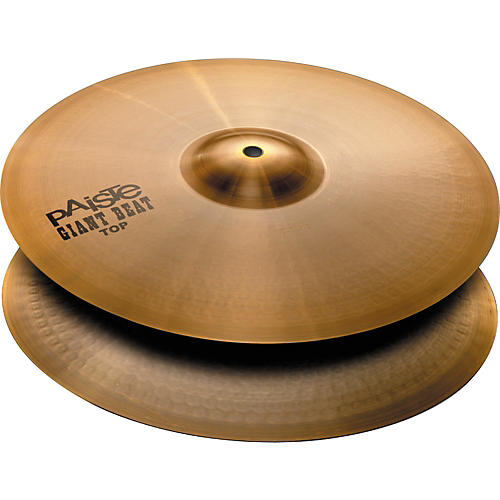 The Paiste Giant Beat Hi-Hats deliver a mellow, warm, yet brilliant sound with a hissing shimmer. They have a medium range and fairly clean mix. Other sound characteristics are light, woody, and open, paired with a well defined, soft chick-sound.

Background: Paiste develops the Formula 602 in the late 1950's from the traditional 20% Bronze, a cymbal line rooted in Jazz and acoustic Rock 'n' roll that exhibits a cool, rich, sophisticated sound character and gains us the first wave of international notoriety - Yet the company does not rest, experiments with CuSn8 bronze alloy, and pioneers CuSn8 cymbals in 1963 - Around the same time, the world is experiencing the rapid expansion of Rock music, which emerges forcefully from the foundations of Blues, Folk, Country and Rock 'n' Roll as bands like the Rolling Stones, Yardbirds, Animals, Beatles, Kinks and the Who take the stage - The electrified sound they generate is groundbreaking - Popular music, simply stated, becomes loud and irreverent - The bronze alloy Paiste is already working which turns out to be perfect for the new soundscape with its amplified volume and frequencies - In 1967 Paiste launches Giant Beat cymbals, which are characterized by warmth, strength and brilliance such as drummers had not known before

Innovation: The Paiste Giant Beat is the first cymbal series to be manufactured from the coveted CuSn8 Bronze, "2002 Bronze"

Sound: Bright, warm, with a complex array of full and dark presence

Recognition: Paiste Giant Beat cymbals are used by drummers who were participants in the defining days of Rock n' Roll