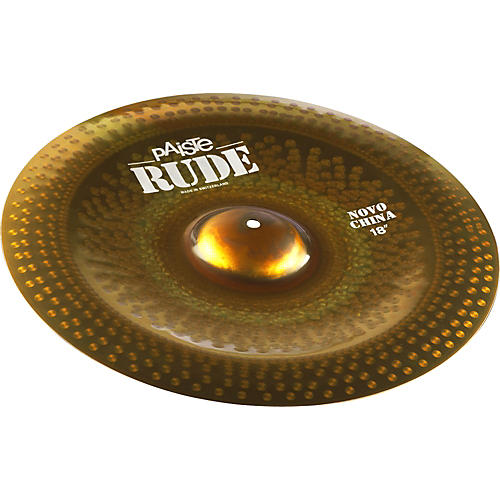 Join For Free
Share your location Order within 7 hrs 48 mins. 12 secs.
In Stock & Ready to Ship Orders placed before 3 p.m. ET usually ship the same business day (except weekends and holidays).
Ship to
Please enter 5 digits
Free Shipping Shipping and Delivery Times If we promise a delivery date and a delivery attempt is not made by this date, we will provide a refund of any shipping fees associated with your order. Questions? Call 800-449-9128
site1sku491460000193000 false MFI=0 true Change Location

Strong, sizzling and deep layered china sound that is perfectly suited for any styles of Rock music.

The Paiste Rude Novo Cymbal delivers a bright, silky, metallic, full, slightly trashy and very powerful sound. It has a wide range and fairly clean mix. Comfortable, responsive and somewhat soft feel. Exotic type of china that also offers the sound and function of a crash cymbal. Its unique shape makes both the bell and downward turned china edge accessible at once. For unique applications and percussive settings.

Background: The Rude Novo cymbal was created as a response to the extreme developments in Heavy Metal and Punk which required extreme cutting power and volume - RUDE was re-launched as 3000 RUDE, then 2002 RUDE and returns to its classic RUDE name in 1999 - In 2005 the RUDE series is expanded with the introduction of Thin Crash models, bringing more control and sophistication to that series

Get rude and get rockin'. Call or click today to order.