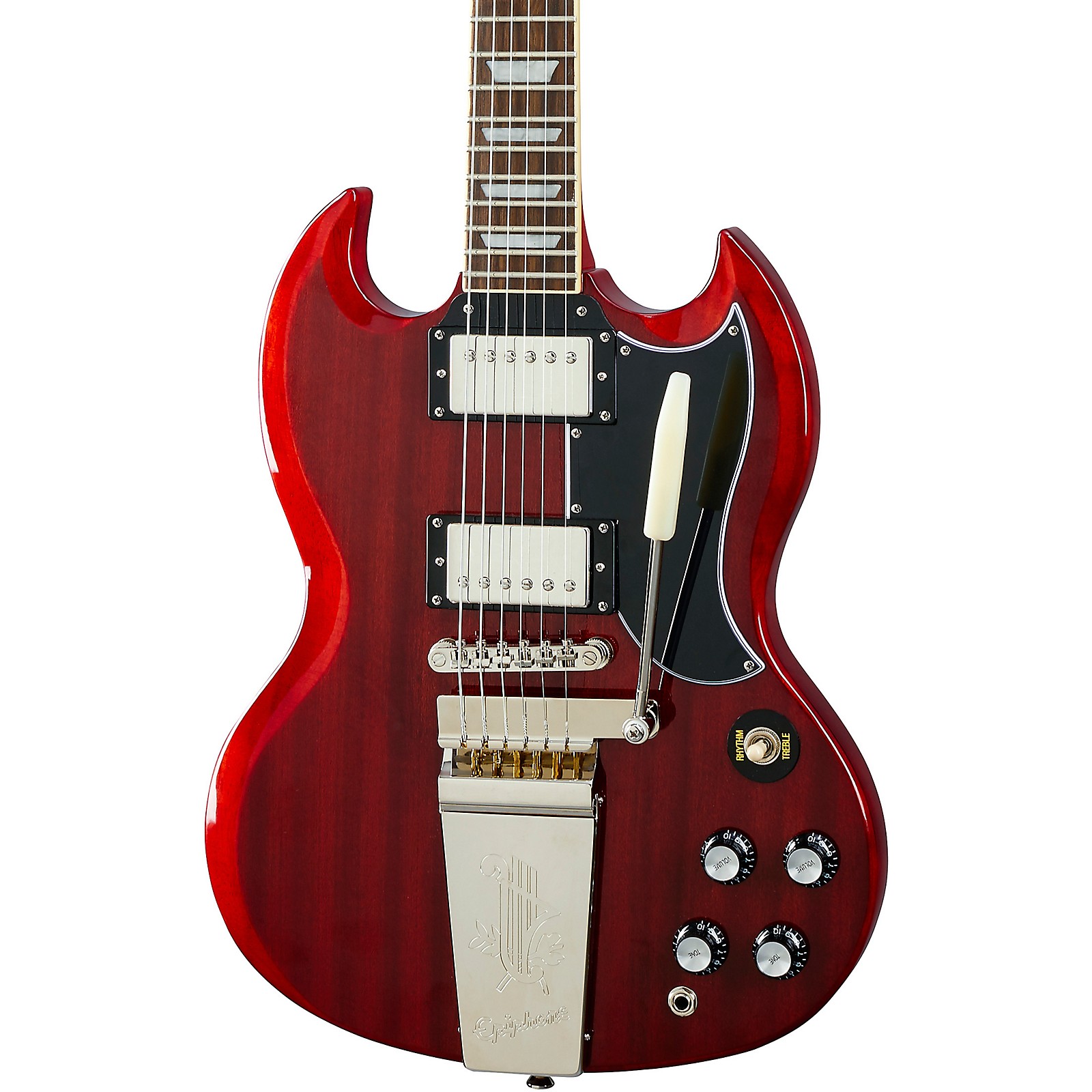 As part of Epiphone’s new Inspired by Gibson Collection, the Epiphone SG Standard '61 Maestro Vibrola is an incredibly sounding rock and roll icon. I...Click To Read More About This Product

As part of Epiphone’s new Inspired by Gibson Collection, the Epiphone SG Standard '61 Maestro Vibrola is an incredibly sounding rock and roll icon. It has many features of the classic Gibson that we here at Musician’s Friend love, including a reinvented Kalamazoo headstock shape and a Maestro Vibrola tailpiece. The neck and body of this classic-inspired guitar is also made from solid mahogany, giving it a warmth and depth that players crave. Add on a Rosewood fingerboard and two Burstbuckers and you’ve got a high-quality yet affordable axe.

The Epiphone SG Standard ’61 Maestro Vibrola also gets an update to its headstock, taking inspiration from the classic Gibson Kalamazoo headstock shape that Musician’s Friend customers love. This guitar also features Vintage Deluxe machine heads with keystone buttons that have been retooled to look like the Gibson Custom shop versions.

The Epiphone SG Standard ’61 Maestro Vibrola is built for any stage, powered by dual Burstbucker humbucking pickups with orange drop capacitors. The Burstbuckers carry a tight low end, complex midrange and soaring highs that will give you that classic 1961 humbucker sound.

Other premium features of the Epiphone SG Standard ’61 Maestro Vibrola include a ABR-1 tune-o-matic bridge, Graph Tech nut that enhances sustain and tonal balance, acrylic trapezoid inlays and nickel-plated hardware. The brainchild of legendary Gibson president Ted McCarty in 1954, the ABR-1 tune-o-matic bridge is slotted directly into the body of the guitar using a separate stud and thumbwheel. This configuration provides a firm seating for the strings and allows you to adjust and fine tune intonation and string height in a matter of minutes.

An Epiphone Inspired by a Gibson Classic

Though its inspired by a Gibson classic, the Epiphone SG Standard ‘61 Maestro Vibrola is built for the modern player. With high-quality and upgraded electronics, premium hardware and distinctive look, this Inspired by Gibson Collection guitar will have you sounding like the rock icons that once inspired you.
FEATURES

Own a piece of history with this new Epiphone. Order today.