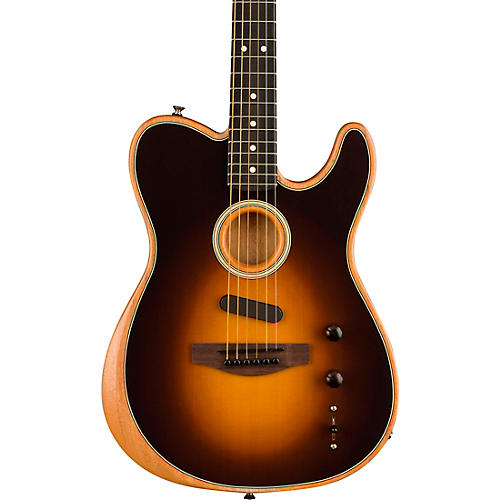 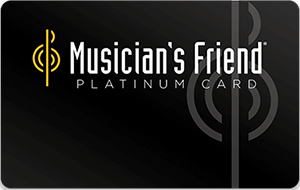 Join For Free
Share your location Order within 7 hrs 48 mins. 12 secs.
In Stock & Ready to Ship Orders placed before 3 p.m. ET usually ship the same business day (except weekends and holidays).
Ship to
Please enter 5 digits
Free Shipping Shipping and Delivery Times If we promise a delivery date and a delivery attempt is not made by this date, we will provide a refund of any shipping fees associated with your order. Questions? Call 800-449-9128
site1skuL87399000002000 false MFI=0 true Change Location

The Fender Acoustasonic Player Telecaster is a game-changing instrument: a single guitar that does the work of many. Two pickups supply a total of six voices that go from focused, small-body acoustic to aggressive electric Tele. Most of us at Musician’s Friend gig without a road crew—we carry our own equipment. Having a guitar that covers the entire setlist without having to make a mid-show switch is a real joy. The Acoustasonic Player borrows many features from the American Acoustasonic introduced in 2019, but Fender has made it more accessible for working musicians. Read on to discover if the Fender Acoustasonic Player Tele might fill a slot (or two) in your collection.

The Acoustasonic Player Telecaster has two pickups: a Fishman undersaddle piezo and a Tim Shaw-designed N4 magnetic in the bridge position. But you’re getting more than just two sounds. Each position of the 3-way switch offers a pair of unique voices that can be played individually, or blended. The electric voice pair gives you clean and twangy Telecaster tones, plus fatter single-coil sounds. The acoustic voice pairing makes the Acoustasonic sound like a short-scale, 000-sized mahogany guitar, or a classic rosewood dreadnought. The last voice pair offers lo-fi clean with lo-fi crunch. It’s like plugging an acoustic directly into the soundboard to double track a guitar line and fill out the mix.

Fender builds the Acoustasonic Player with mahogany back and sides, and a Sitka spruce top. Though it’s nowhere near the depth of a standard acoustic guitar, we found that the tonewood combination provided real satisfaction while strumming unplugged.

An electric neck with a familiar feel

This Player Telecaster has a Modern Deep C profile neck which plays fast like an electric guitar, but it’s made out of mahogany, which is more apt for an acoustic. The rosewood fingerboard has a 12" radius, letting you bend strings without fretting out, while still being flat enough for fingerpicking.

We live at a time where anyone can release a studio-quality album from home and hit the charts. It pays deep dividends to be a musician who can do it all, so why shouldn’t your guitar do it all, too? The Fender Acoustasonic Player Telecaster lets you take a single instrument to a show and cover electric and acoustic guitar parts equally well. It comes with a 1225 deluxe gig bag featuring a super-padded handle and shock-absorbing padded backpack straps.

Click or call to order the Acoustasonic Player Tele today.