Join For Free
Share your location Order within 7 hrs 48 mins. 12 secs.
In Stock & Ready to Ship Orders placed before 3 p.m. ET usually ship the same business day (except weekends and holidays).
Ship to
Please enter 5 digits
Free Shipping Shipping and Delivery Times If we promise a delivery date and a delivery attempt is not made by this date, we will provide a refund of any shipping fees associated with your order. Questions? Call 800-449-9128
site1skuL20539000005000 false MFI=0 true Change Location 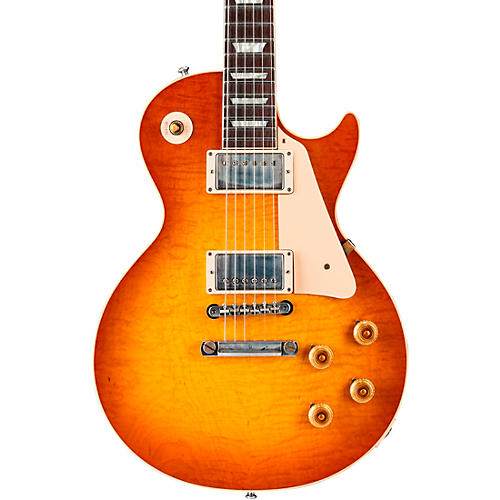 The year to get.

Gibson Custom's Historic Series are far beyond being copies. A lot of time, effort and research went into the details of making a guitar that is as close as you can get to what you would have found hanging on the wall of your local music store when they were first produced. Here's what Gibson Custom has to say about this particular model:

1959 is widely considered to be the pinnacle year for Gibson's mid-century solid body electric guitars, and no 1959 Gibson model is more famous than the sunburst Les Paul Standard. At first a commercial failure, the model was eventually adopted by some the world's greatest guitarists - Jimmy Page, Duane Allman, Mike Bloomfield, Keith Richards, Eric Clapton, and Billy Gibbons, to name a few. The rarity and celebrity association of the model has pushed the values of original examples into the stratosphere.

Gibson Custom's 1959 Les Paul Standard is a painstakingly-accurate replica of these highly-valuable guitars rendered in detail so intricate that even the chemical composition of the parts has been scientifically examined and re-engineered-and that's just one small example. Sonically, visually, and tactilely, owning a Gibson Custom Shop Historic '59 Les Paul Standard is as close as one can get to owning a priceless original. Includes hardshell case.

Musician's Friend Private Reserve Guitars are your gateway to some of the world's most exclusive, hand-built, custom and semi-custom instruments. This carefully curated collection of spectacular guitars and basses contains many extremely limited-edition and unique one-off instruments that you won't find anywhere else. The world's major custom shops are represented here, as well as many top-flight small builders and individual luthiers. Our PRG associates are specially trained to provide you with detailed information about any guitar in the collection, so you can be sure you're choosing the special instrument that's perfect for you. Call now, and have the instrument of your dreams in your hands as soon as tomorrow.

All the coveted features are here. Order today.