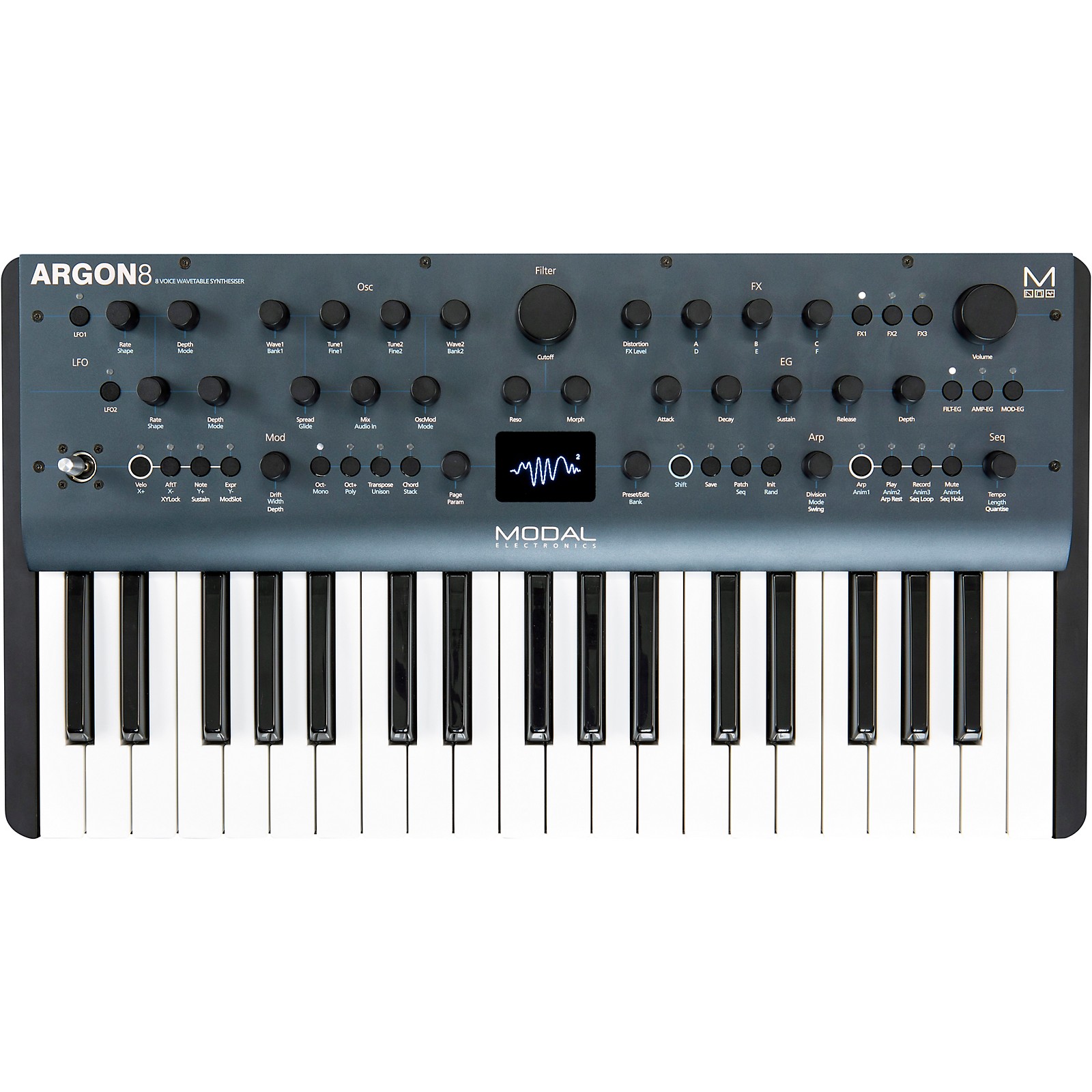 The Modal Argon8 37-Key 8-Voice Polyphonic Wavetable Synthesizer is a fresh synth with an abundance of sound-design capabilities and features includi...Click To Read More About This Product

The Modal Argon8 37-Key 8-Voice Polyphonic Wavetable Synthesizer is a fresh synth with an abundance of sound-design capabilities and features including a Fatar keybed and sequencing. Read on.

Oscillators
120 carefully crafted wavetables split into 24 banks of 5 morphable waveform sets, covering virtual analogue classics through to cutting edge EDM and many from the original Modal 002 as well as a whole range of mathematically generated tables. Additional PWM bank and 3 noise/modulation banks accessible on Oscillator 2.

32 static wavetable processors including de-rez, wave folders, wave shapers, phase shapers and rectify that can be applied to the 120 wavetables to give a mind boggling array of permutations and new waveshapes.

Keyboard
FATAR TP/9S Full size keys with both velocity and aftertouch, 37 on the ARGON8 and 61 on the ARGON8X.

1.54 inch large OLED display – that provides instant visual feedback to the user at all times of playing/editing.

Inbuilt sophisticated programmable arpeggiator of 32 steps with rest capability with up to 2048 steps before repeating.

Glide/Portamento with both legato and staccato modes.

Filter can be morphed from low pass, through band pass, to high pass.

A 4-axis joystick that can be assigned to a huge range of modulation destinations and virtually ‘locked’ when desired.

Three dedicated envelope generators for AMP, MOD and FILTER that can be accessed independently or all three simultaneously including negative. (reverse) versions

Delay FX, LFO’s, sequencer and arpeggiator can be either clocked internally or externally.

100 sequencer presets that can be linked to any patch for quickly loading arrangements.

Storage
500 patch memories, all fully editable and ships with 300 factory programs and 200 user patch spaces. Patch upload and download through the free MODALapp.

Quick Recalls accessible from the panel for quickly loading your favourite patches. 8 slots on keyboard variants, and 4 on ARGON8M.