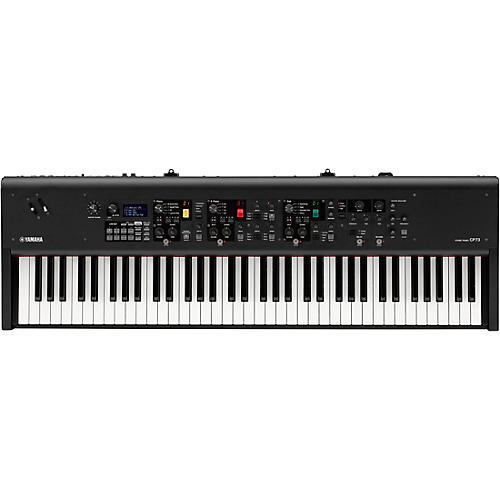 Join For Free
Share your location Order within 7 hrs 48 mins. 12 secs.
In Stock & Ready to Ship Orders placed before 3 p.m. ET usually ship the same business day (except weekends and holidays).
Ship to
Please enter 5 digits
Free Shipping Shipping and Delivery Times If we promise a delivery date and a delivery attempt is not made by this date, we will provide a refund of any shipping fees associated with your order. Questions? Call 800-449-9128
site1skuL47305000000000 true MFI=0 true Change Location

Experience the touch, control and sound of the Yamaha CP73. The CP73 incorporates more than 100 years of innovation into a stage piano designed for gigging keyboardists and discerning pianists. The CP Series offers an intuitive, one-to-one interface with immediate control over a wide range of acoustic and electric piano sounds suited for any music genre. The CP73 features a 73-key Natural Wood Graded Hammer action any piano player will love. Sound is the most integral part of any instrument, and the CP73 has over 55 incredibly rich and detailed voices that will keep you playing for hours. It combines the realistic sounds with an authentic touch for an unforgettable playing experience.

At the heart of the CP73 is Yamaha’s AWM2 (Advanced Wave Memory) sample-based sound engine capable of delivering a larger than life sound that could fill any room. Inside there are three premium concert grand pianos including the Yamaha CFX, Yamaha S700 and the Bösendorfer Imperial 290. Each one of these legendary pianos we’re painstakingly recorded to the finest detail to capture every nuance of their sound, and they’re all encapsulated inside the CP73. In addition to these classical beauties, there’s also two Yamaha upright pianos. The SU7 and the most popular upright piano in the world the U1, which has a vintage character that’s perfectly represented in the CP73.

If you’re looking for more soul, the Yamaha CP73 is loaded with sounds from popular electric pianos like the Yamaha CP80 and other well-respected instruments. These pianos are packed with a powerful sound and wide dynamic range that can cut through live bands on stage. Want a grittier sound? Try the 75 Rd, or maybe the warm, fat tones of the 73 Rd will suit your mix. There’s a variety of other keyboard sounds including organs, clavinets and more, and the CP73 features an immersive collection of synth sounds for covering any gig or session. Everything from warm pads, lush strings and deep synth basses, to synth leads, brass and more.

The keybed on the CP73 features a balanced action with an authentic electric piano feel. It has 73 keys from E to E, perfect for playing alongside guitarists and bassists. The CP73’s action is perfectly suited for playing the wide range of sounds it comes with. The overall design is made to withstand any troubles you may find on the road. It’s among the lightest and most compact instruments in its class, leaving plenty of room for additional gear. The CP73 has a one-to-one interface that’s intuitively designed to give you immediate control of your sound on stage or in the studio. There’s no programming, menu-diving or web searching with CP. The intuitive CP interface allows fast and easy splits, layers and sound-shaping directly from the front panel. The CP73 can easily integrate into your studio or stage setup with onboard USB MIDI and audio connectivity.

It's time to upgrade. Order today.