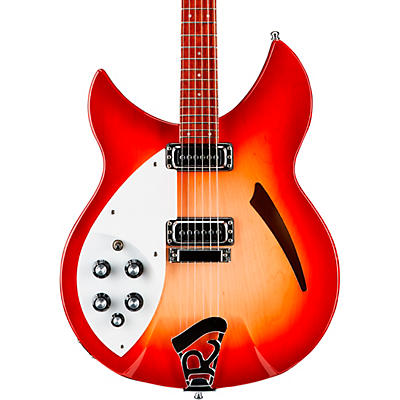 If you know your guitar history, then Rickenbacker is a name you'll know very well. They were, after all, the first luthier to produce electric guitars. Their first instrument was a Hawaiian lap steel released in 1931, but today they're better known for the guitars they produced decades later, starting in 1960 when John Lennon bought his Rickenbacker 325 Capri. It was the first of many Rickenbackers played by the Fab Four, leading to those instruments becoming symbols first for the Beatles, and then for the British invasion as a whole. So if you're looking for a guitar to get you through a hard day's night, you're on the right track with this selection of Rickenbacker left handed electric guitars.

One of the most iconic models you'll find in this section is the Rickenbacker 330 Left-Handed Electric Guitar. It has all the hallmarks of an early-'60s Ric, including the famous carved hollowbody design, the highly-playable slim neck and the trademark dual truss rods. The 330's paired single-coil pickups have a lively character with all the '60s jangle you could ask for, and their range runs from clear and concise to heavy and overdriven. Any way you look at it, this guitar is an absolute classic.

For those who prefer to change things up a bit, there's also the Rickenbacker 360 Left-Handed Electric Guitar to consider. It comes from the same time period as the 330, but it was a bit more avant-garde for the era. It's still a bold guitar choice today, sporting a vintage look and sound that make it the guitar of choice for artists like Peter Buck and Laura Jane Grace. Being part of the 300 series, the 360 has a lot in common with the 330 - but one of the key differences between the two is that the 360 outputs in stereo, while the 330 uses a mono jack plate.

Their success with the Beatles was only the beginning of Rickenbacker's golden era. Considering that these guitars are still impossible to keep in stock half a century later, it's safe to say they have the same kind of staying power as the music they were used to produce. And best of all, thanks to Rickenbacker left handed electric guitars, being a southpaw doesn't mean missing out on your invitation to the party. Just take a look at what this section has to offer - your next guitar could be right here.