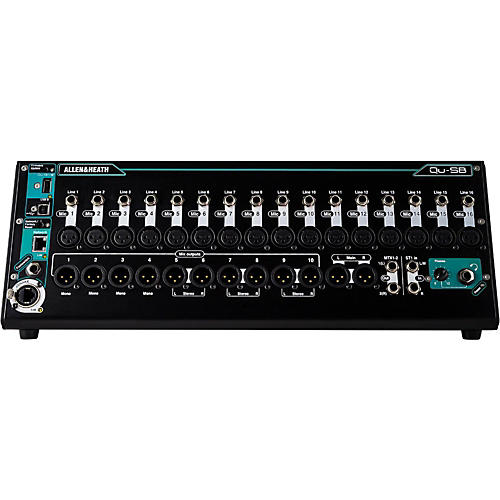 Join For Free
Share your location Order within 7 hrs 48 mins. 12 secs.
In Stock & Ready to Ship Orders placed before 3 p.m. ET usually ship the same business day (except weekends and holidays).
Ship to
Please enter 5 digits
Free Shipping Shipping and Delivery Times If we promise a delivery date and a delivery attempt is not made by this date, we will provide a refund of any shipping fees associated with your order. Questions? Call 800-449-9128
site1skuJ46762000000000 true MFI=0 true Change Location

Qu-SB is an ultra-compact digital mixer that frees you to mix from anywhere in the venue and provides a smart, portable solution for performing bands and artists. The hardware component of the system can be carried under one arm and comes loaded with A&H’s acclaimed suite of FX emulations and dynamics, making it a smart replacement for an old analoge mixer and a rack full of outboard FX.

The companion Qu-Pad app is an intuitive interface for setting up the show and mixing live from your iPad, and there’s also a customizable Qu-Control app that lets you choose just a few essential controls that you really need in front of you for easy access during the show. Couple these with the Qu-You personal monitoring app for Android / iOS and Qu-SB is a fantastic choice if you’re mixing your own monitors and want to get the same great sound wherever you play.

With all of your settings saved and ready, plus multi-track recording and playback of previous shows for virtual soundchecks, you’ll be all set to play in record time. On top of the 18 on board inputs and 14 outputs, Qu-SB has you future-proofed with plug n’ play expansion up to 38 inputs / 24 outputs via a family of remote AudioRacks.

Mixing Apps
Having massive processing power and advanced functionality is great, but it counts for nothing if you can’t access the controls you need in a heartbeat. Qu-SB is designed to integrate seamlessly with the Qu-Pad iPad app, providing fast, easy access to all settings, including channel processing, meters and RTA views, FX racks, scene management, USB audio control, setup menus and much more.

Multitrack Audio Streaming
Qu’s built-in interface streams multitrack audio to your Mac or PC via a flexible patching system: all Input channels and the Main LR can be recorded at the same time, or you may choose to record something different such as FX returns or a pair of mixes.

The returns from the computer can be assigned to the Input channels. The interface is class-compliant on Mac OS X – and drivers are available for Windows systems. Either way, it will be recognized straightaway by any DAW supporting ASIO or Core Audio, including Logic, Cubase, Reaper, and Pro Tools.

QU Ecosystem
Qu provides much more than just a mixer. Qu is an entire ecosystem with Remote AudioRacks allowing I/O to be placed where it’s needed, ME Personal Mixers expanding monitor mixes and enabling simple, time-saving local control, Qu Apps for complete remote setup and wireless mixing on stage or anywhere else in the venue, ProFactory Mic presets to speed up preparation time and ensure the best sound, plus USB recording and DAW integration for powerful workflow optimization from one centerpiece device.

Format InputsOutputs Other Connectivity Onboard effects Equalization Other