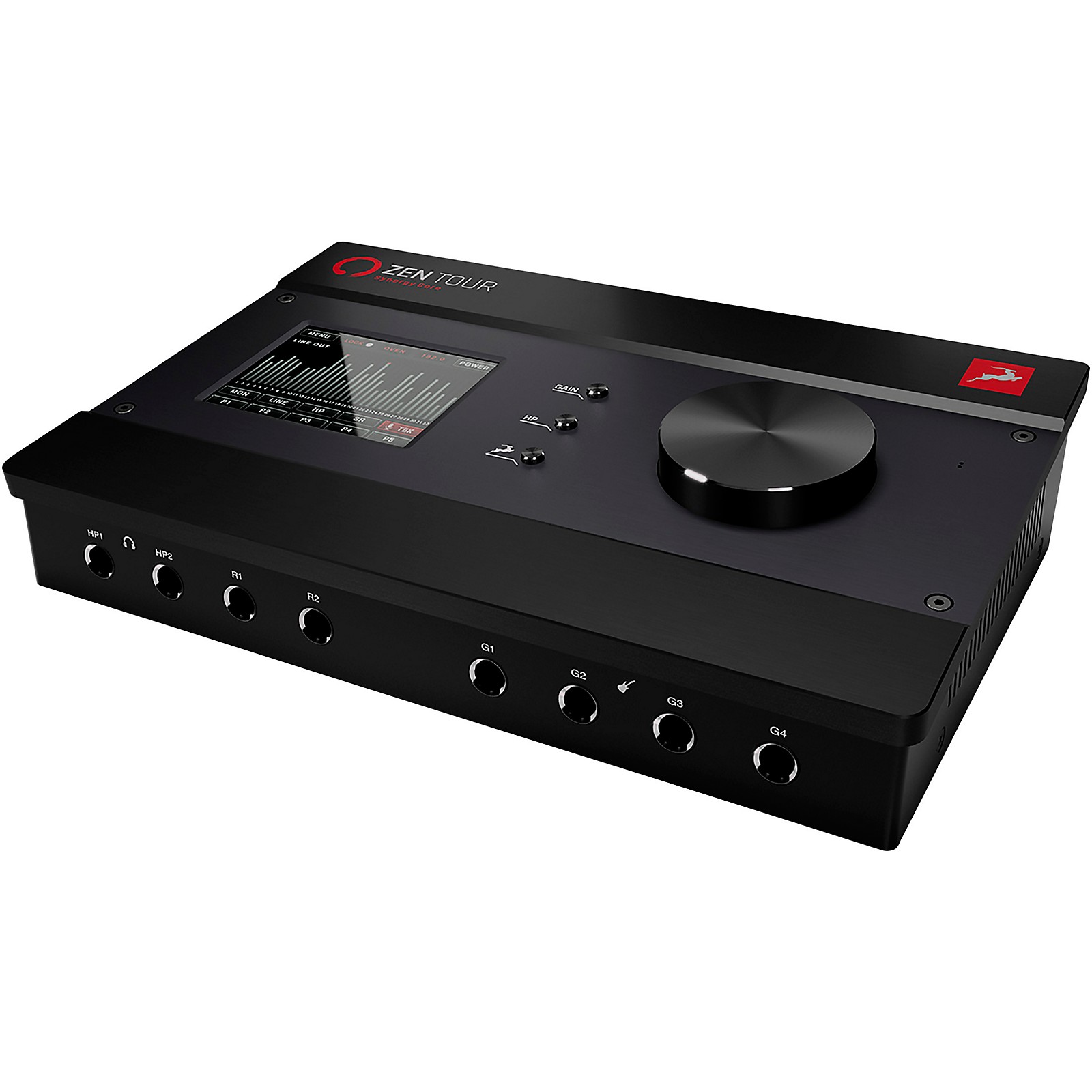 A desktop audio interface in a league all its own, the Antelope Audio Zen Tour Synergy Core packs Antelope’s cutting-edge Synergy Core FX processing ...Click To Read More About This Product

Comprehensive analog and digital I/O, with both USB and Thunderbolt 3 connectivity.

A major step up from the hit original Zen Tour interface, the Synergy Core adds upgraded pro-class A/D and D/A conversion, Antelope's signature Acoustically Focused Clocking technology, and the easy-to-use touchscreen control from Antelope’s flagship Goliath interfaces. Simply put, the Zen Tour Synergy Core outperforms any competing product with its unbeatable value and vast studio potential -- a complete all-around solution for artists and producers, both on your desktop and on the go.

Want to record wet/dry and monitor in real-time through a mic preamp emulation, EQ, compres-sor(s), modulation, and reverb? With your plug-ins offloaded to the dedicated FX processing built into the Zen Tour Synergy Core, complex FX chains are no sweat. The Synergy Core platform takes the load off your host CPU, eliminating the distracting latency that plagues DAW native plug-ins – so you can reduce your buffer size and improve your recording system’s stability. Loaded with 4 ARM DSP cores and 2 FPGA processors, the Zen Tour Synergy Core can process up to 256 FX instances over 32 audio channels with ultra-low latency and zero CPU drain.

Get creative in the studio and enhance your tracks with a vast variety of effects, including Antares Auto-Tune Synergy, Vari-Speed Tremolo, Space Flanger, Opto-2A, and tons more. Your Zen Tour Synergy Core comes with 36 premier FX from Antelope’s growing library, so you can get going immediately -- including 2 preamp models, 4 equalizers, 5 compressors, 22 guitar amps & cabs, 2 special processing FX, and AuraVerb reverb.

Antelope Audio re-engineered the Zen Tour’s input and output stages with upgraded op-amps and updated converter chips. Utilizing Antelope’s signature Acoustically Focused Clocking technology, the Zen Tour Synergy Core maintains pristine AD/DA conversion for artifact-free recording and critical lis-tening, with a best-in-class dynamic range of 124 dB on the ADC, 127 dB on the line out DAC, and 130 dB dynamic range on the monitor outputs. You get the pro-class conversion found in the Orion Studio Synergy Core interface – in a much more portable package.

Zen Tour Synergy Core's comprehensive connectivity rivals that of rackmount pro audio interfaces with 4 Instrument/Line inputs, 4 Mic/Line Ins, 8 Line Outs (DC-Coupled), a pair of Monitor Outs, 2 Headphone Outs and 2 Re-Amp Outs – a total of 8 inputs and 14 outputs – with ADAT & S/PDIF expandability for an additional 10 channels of digital I/O. The Zen Tour Synergy Core is ready to plug into your Mac or Windows PC, with Thunderbolt 3 (Type-C) as well as USB 2 (Type-B) for cross-platform compatibility -- and users of multiple computers/operating systems can switch connections on the fly.

The comprehensive Routing Matrix inside Antelope’s software Control Panel houses a full-fledged digital patch bay, so you can freely route audio between the interface's analog and digital inputs. Process DAW tracks through Synergy Core FX and re-amp guitar DIs with the Shred Guitar Amps & Cabs, or integrate external audio equipment. With the 'training wheels' removed, your workflow can be as intricate as you want it to be.

Hand-assembled in Europe, the Zen Tour Synergy Core can rock both your studio desktop and your band’s practice space – and live to tell about it.

Ever since it hit the pro audio world back in 2016, the original Antelope Zen Tour interface has been in a league of its own. Never before had artists and producers enjoyed this kind of connectivity, sound quality, and touchscreen control on a desktop unit. The Zen Tour Synergy Core more than lives up to its predecessor’s impressiveness – and unlocks Antelope’s future-proof Synergy Core FX processing platform, too.
FEATURES