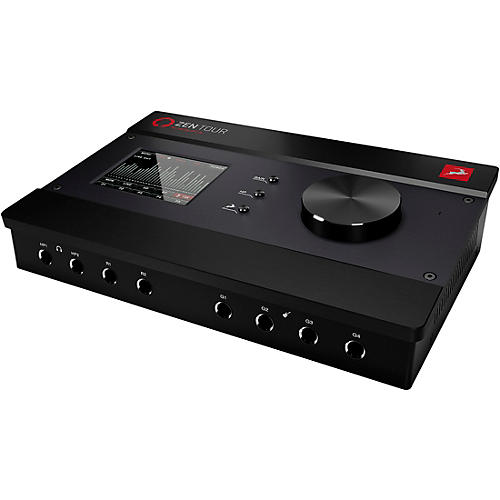 Join For Free
Share your location Order within 7 hrs 48 mins. 12 secs.
In Stock & Ready to Ship Orders placed before 3 p.m. ET usually ship the same business day (except weekends and holidays).
Ship to
Please enter 5 digits
Free Shipping Shipping and Delivery Times If we promise a delivery date and a delivery attempt is not made by this date, we will provide a refund of any shipping fees associated with your order. Questions? Call 800-449-9128
site1skuL74974000000000 true MFI=3 true Change Location

Comprehensive analog and digital I/O, with both USB and Thunderbolt 3 connectivity.

A major step up from the hit original Zen Tour interface, the Synergy Core adds upgraded pro-class A/D and D/A conversion, Antelope's signature Acoustically Focused Clocking technology, and the easy-to-use touchscreen control from Antelope’s flagship Goliath interfaces. Simply put, the Zen Tour Synergy Core is a complete all-around solution for artists and producers, both on your desktop and on the go.

Stacked With Effects Potential
Want to record wet/dry and monitor in real time through a mic preamp emulation, EQ, compressor(s), modulation and reverb? With your plug-ins offloaded to the dedicated FX processing built into the Zen Tour Synergy Core, complex FX chains are no sweat. The Synergy Core platform takes the load off your host CPU, eliminating the distracting latency that plagues DAW native plug-ins—so you can reduce your buffer size and improve your recording system’s stability. Loaded with four ARM DSP cores and two FPGA processors, the Zen Tour Synergy Core can process up to 256 FX instances over 32 audio channels with ultra-low latency and zero CPU drain.

Route Any Audio, Anywhere
The comprehensive Routing Matrix inside Antelope’s software Control Panel houses a full-fledged digital patch bay, so you can freely route audio between the interface's analog and digital inputs. Process DAW tracks through Synergy Core FX and re-amp guitar DIs with the Shred Guitar Amps & Cabs, or integrate external audio equipment. With the "training wheels" removed, your workflow can be as intricate as you want it to be.

Sturdy & Portable
Hand-assembled in Europe, the Zen Tour Synergy Core can rock both your studio desktop and your band’s practice space—and live to tell about it.

Like the Original Zen Tour Interface—Only Better
Ever since it hit the pro audio world back in 2016, the original Antelope Zen Tour interface has been in a league of its own. Never before had artists and producers enjoyed this kind of connectivity, sound quality and touchscreen control on a desktop unit. The Zen Tour Synergy Core more than lives up to its predecessor’s impressiveness—and unlocks Antelope’s future-proof Synergy Core FX processing platform, too.