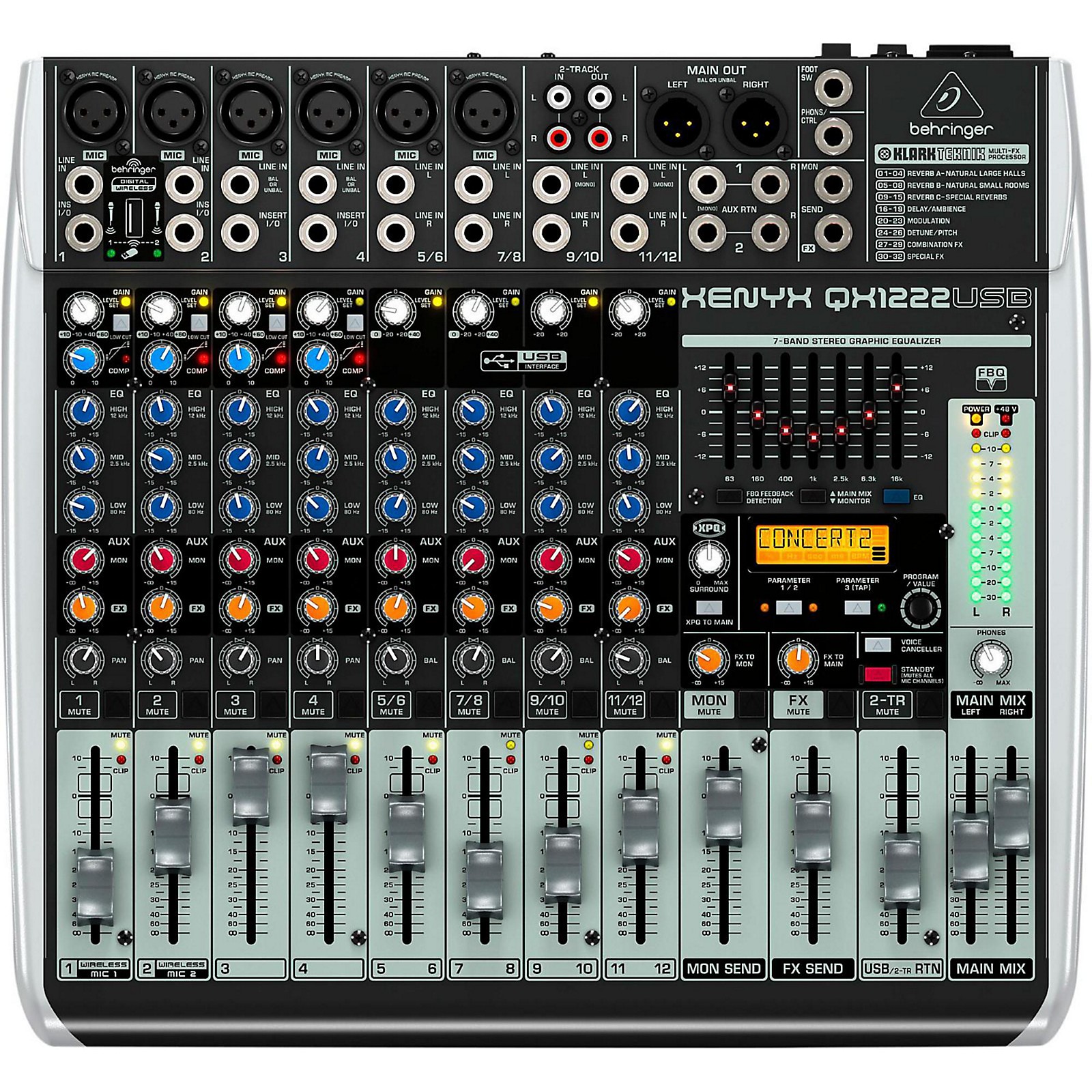 The compact XENYX QX1222USB mixer allows you to effortlessly achieve premium-quality sound. Channels 1 - 4 feature our XENYX Mic Preamps, renowned for their pristine performance, plus 2 of the 4 stereo channels accept XLR inputs, as well as Line-Level sources. All mono channels get Behringer's ultra-musical "British" 3-band EQs and easy-to-use "one-knob" compressors for the ultimate in punch and clarity. Also added is a KLARK TEKNIK FX processor with 32 studio-grade presets with dual addressable parameters, Tap function and storable user parameter settings “ and the QX1222USB becomes an incredibly versatile mixer for your live performances.

But the XENYX QX1222USB isn™t just designed to handle your live gigs; they also provide the state-of-the-art tools you need to make stunning, professional-quality recordings. Along with their built-in USB/audio interfaces, the XENYX QX1222USB comes with all the recording and editing software needed to turn your computer system into a complete, high-performance home recording studio.

Sonically Sweet Mic Preamps
The XENYX QX1222USB gets its name from Behringer's high-headroom XENYX mic preamps, which have been praised by audio engineers all over the world. These state-of- the-art mic pres represent a major step in the evolution of audio technology “ and they can easily hold their own, even when compared to the most expensive stand-alone mic preamps. XENYX preamps offer a staggering 130 dB of dynamic range, with a bandwidth that extends from below 10 Hz to well above 200 kHz. Armed with these outstanding mic preamps, the XENYX QX1222USB provides such transparent, crystal-clear performance you just might think someone upgraded your mics while you weren™t looking.

Studio-Quality Compressor - Stairway to Heaven
This totally transparent and musical compressor design allows your full dynamic range to shine through until your signal reaches the compression threshold, which is indicated by the highly visible status LED. The compressor increases sustain and gently smoothens out signal peaks, which is especially handy when you'e laying down the funk, aÌ la slap and pop “ or hammering home your most-aggressive metal lines. The resulting output level lets you unleash powerful and impact-laden bass lines, while still sitting right where you need to be in the mix.

Sublimely Musical British EQ
The British consoles of the 1960s and ˜70s changed the sound of rock and roll “ without them the British Invasion might not have happened. Those legendary mixing desks soon became the envy of engineers and producers all over the world. The channel EQ on the XENYX mixers is based on that very same circuitry, allowing you to imbue signals with incredible warmth and detailed musical character. Even when applied generously, these equalizers exhibit sweet forgiveness and superb audio quality.

KLARK TEKNIK - The Reverb that Made History
KLARK TEKNIK is recognized worldwide as one of the most prestigious British audio companies, with a 40-year pedigree and even a TEC Lifetime Achievement Award to back it up. The Company has designed and manufactured products for world-class artists, and their legendary DN780 reverb processor is considered by leading audio engineers around the world as the industry standard. Check out their website to learn more about KLARK TEKNIK's legendary heritage.

BEHRINGER is proud to incorporate custom-engineered KLARK TEKNIK effects into their products. Featuring 100 world-class presets to choose from including reverb, chorus, flange, delay, pitch shift and many other amazing eff ects, KLARK TEKNIK created the 24-bit, studio-grade eff ects engine for BEHRINGER “ to give your performance that truly professional fi nishing touch.

The ULM wireless system combines professional-quality sound with simple setup and an intuitive interface for legendary audio performance right out of the box. Just plug in the ULM receiver "dongle", and instantly you have an exceptional wireless mic system. Freeing you from cables is the simply easy way to own the stage.

FBQ - Totally Feedback-Free
For more than 20 years, BEHRINGER has designed and manufactured some of the most successful FBQ Feedback Elimination processors. Now you can own and enjoy the benefits of this technology, as Behringer's FBQ Feedback Detection System has been integrated into this product, so your sound system is completely feedback-free, allowing you to focus on your performance. Utilizing an ultra-fast feedback detection system, this ingenious circuitry helps you recognize and tame feedback frequencies immediately. When feedback is sensed in a specific frequency range, the LED on the associated EQ fader illuminates, showing you at a glance which fader to lower to overcome the feedback.

Special Features...
The QX1222USB comes equipped with channel Inserts for inputs 1 “ 4 for use with outboard FX, a stereo 7-band graphic EQ, which can be assigned to the main or monitor buses and our proprietary FBQ Feedback Detection System. Other features include full-sized faders for MON and FX Sends, Behringer's XPQ 3D stereo surround effect (creates a broader, enhanced stereo image), and a handy Voice Canceller function for removing vocals from pre-recorded media for "instant-karaoke" applications.

Recording Bliss
There was a time when the recording process called for lots and lots of expensive gear, which meant the average musician had to buy time at a recording studio “ and that time was pricey indeed. But modern technology has put personal recording well within the reach of virtually anyone with access to a computer. How do you get all that music flying around your brain into your computer? That™s where the XENYX QX1222USB comes in. Thanks to the built-in, bi-directional stereo USB audio interface, you can connect any of these mixers directly to your PC or Mac computer via a single USB cable. Now any signal source you connect to the mixer can be recorded directly to your hard drive.

Free Software Would Be Nice!
Because you™ll want to take full advantage of the XENYX QX1222USB recording and podcasting potential, Behringer has included all the software you™ll need for audio recording, editing and even podcasting. You™ll be ready to go live on your PC or Mac right out of the box! They've also provided a free download of more than 150 virtual instruments and FX plug-ins “ turning your computer into a powerful home-based or mobile recording studio from input to output.