Join For Free
Share your location Order within 7 hrs 48 mins. 12 secs.
In Stock & Ready to Ship Orders placed before 3 p.m. ET usually ship the same business day (except weekends and holidays).
Ship to
Please enter 5 digits
Free Shipping Shipping and Delivery Times If we promise a delivery date and a delivery attempt is not made by this date, we will provide a refund of any shipping fees associated with your order. Questions? Call 800-449-9128
site1skuH77588000000000 true MFI=1 true Change Location 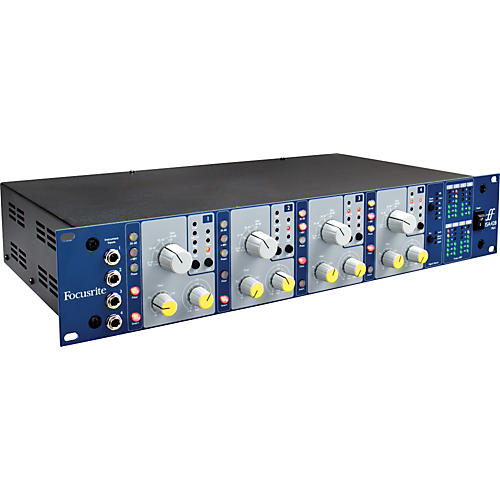 Focusrite's ISA mic preamps can be traced back to 1985, when console designer Rupert Neve was asked by Sir George Martin to create new modules for the console at AIR Montserrat. The modules he created included the legendary ISA110, on which all ISA microphone preamps are based. With their characteristic Lundahl LL1538 input transformer, along with one concession to modernity—variable input impedance—ISA mic preamps are very much the same as they were 30 years ago. But today, instead of solely gracing the consoles at AIR, ISA mic pres are at the heart of hundreds of hits made in leading studios and by leading engineers, artists and producers, across the world.

Now in its second generation, the ISA 428 MkII incorporates four of Focusrite's renowned mic pres in a simple-to-operate 2U enclosure, placing four mic preamps, instrument inputs and line ins at your fingertips. The original Focusrite mic pre was designed to suit the microphones of the time; today's model makes a small change, adding three additional input impedances to the classic ISA110 setting, allowing you to match any microphone, old or new, and access a wide range of sounds, from the character and warmth of a vintage mic to the clear transparency of a modern design. Or, you can experiment and bring out just the qualities you want.

In addition to the mic inputs, there are four front-panel instrument inputs, making the ISA428 MkII ideal for overdubs in the control room with no need for a DI box. On the back: four line inputs and switchable insert points on each channel to allow routing via external signal processors. There's also a versatile, vintage design variable high-pass filter to control what's going on at the bass end. And finally, accurate, 6-LED meters to tell you exactly what's going down. Optionally, available for the ISA428 MkII is a precision eight-channel A-D converter with 122dB dynamic range and superb jitter performance (sold separately)—ideal for simple interfacing with your DAW.

UPDATE: Now comes with Brainworx bx_console Focusrite plug-in
This awesome plug-in recreates the analog signal paths of Focusrite’s revered ISA 110 and ISA 130 modules, which were a part of the Focusrite Studio Console. Designed and coded by the DSP geniuses at acclaimed software house Brainworx, the new bx_console Focusrite VST/AU/AAX plug-in for Mac and PC faithfully captures the sound, feel and styling of the original iconic hardware.

If you purchased any Red, RedNet or ISA solution from January 2020 on, you will have the plug-in available in your Focusrite account as long as you’ve registered your product.

A great front end for your DAW—4 classic preamps plus an optional 8 channels of conversion—all at an amazing price. Order today!