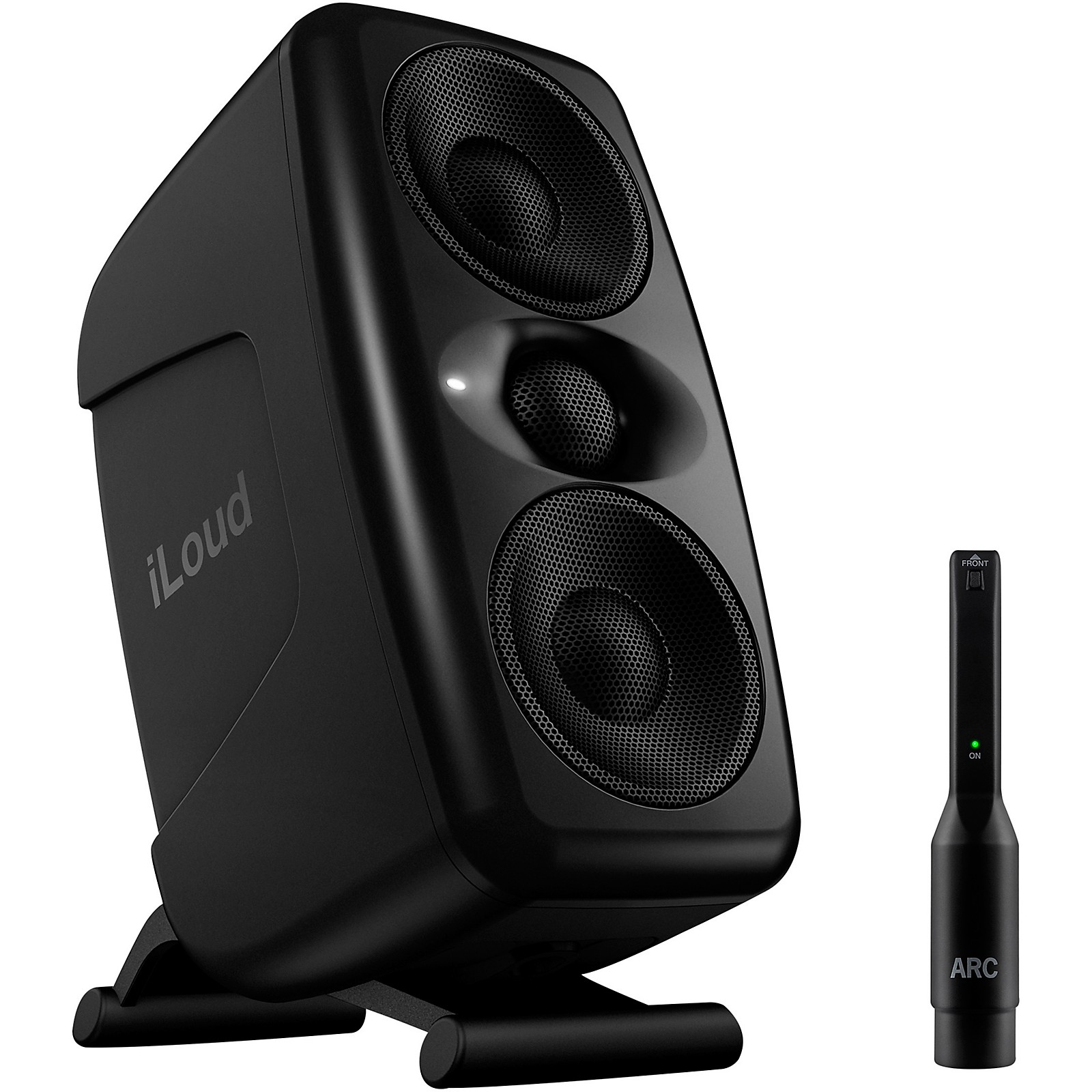 IK’s iLoud Micro Monitors stunned an industry. Producers and engineers at every level marveled at the performance coming from such a small setup, so ...Click To Read More About This Product

IK’s iLoud Micro Monitors stunned an industry. Producers and engineers at every level marveled at the performance coming from such a small setup, so IK challenged their team to push its concept even further—to design a new compact speaker to rival 5”, 6” and even 8” monitors. The result is iLoud MTM, and it changes everything about the sound, accuracy and convenience of reference monitors in today’s modern studio. Once you hear iLoud MTM, you’ll find it hard to ever go back to traditional big-box speakers.

Reference-class, ultra-linear response
The first job of any studio monitor is to deliver accurate, uncolored sound so you can trust your mixing decisions will translate across multiple playback systems. iLoud MTM uses the most advanced DSP techniques to provide total control over the speakers’ performance, delivering results simply not obtainable with traditional analog designs. Highs are neutral and defined, mids are clear and balanced, and lows are as balanced as ever. You can mix for hours with no ear fatigue, and the work you create will translate better than ever. And of course, it’s loud, with 100W RMS total power per speaker and 103dB SPL maximum sound pressure, delivering the proven volume the iLoud brand is known for.

Extended low-end to rival larger systems
iLoud Micro Monitor wowed the world with the bass performance it delivered from a 3” speaker that “defied physics”. But iLoud MTM offers even more, with even bass response down to an astonishing 40Hz ideal for modern music styles. iLoud MTM debuts IK’s new patent-pending Physical Response Linearization (PRL™) system, that uses a precise model of the enclosure’s design, construction and materials, combined with electro-mechanical measurements of the real units, to correct the system’s performance in real time. The result is a stunningly “firm,” balanced and defined low end, to surpass the sound of speakers even twice iLoud MTM’s size. You won’t believe sound like this comes from a monitor so small.

A new phase in accurate sound reproduction
Most conventional studio monitors, even high-end designs, suffer from skewed phase response caused by traditional, phase-shifting crossovers and driver/enclosure phase alterations. The end result is an unfocused stereo image, blurry transients, and overall lack of detail. iLoud MTM leverages IK’s two decades of DSP experience to offer a true phase-coherent response across the useful frequency spectrum, for unbelievably realistic, natural sound like you’ve never heard. You’ll hear instruments and dialogue as if it’s happening live, discover more detail in your tracks than ever before, and stop wasting hours trying to EQ away issues with your mixes that were never really there. This linear-phase response is rarely found in speakers even several times iLoud MTM’s price, and has to be heard to be appreciated.

Symmetrical MTM design for superior imaging and precision
iLoud MTM uses a midrange-tweeter-midrange symmetrical design, with a pair of 3.5”high-performance woofers and one 1” high definition, back-chamber loaded tweeter, which provides ultra-precise, defined, point source sound that can’t be achieved by traditional 2-way systems at close distances. This means an even more natural, life-like sound, where the speakers “disappear” and you can focus on the music. It also minimizes the ear fatigue caused by traditional 2- or 3-way designs, where different frequencies arrive at your ear at different times. So you can mix longer, with less effort. iLoud MTM’s design also offers exceptional sound dispersion, enhancing the transparency and neutrality of what you hear. The controlled dispersion minimizes the impact of room acoustics, for even truer monitoring.The end result is faster, easier mixing with better results. On top of that this innovative design keeps the monitor dimensions to a minimum, 30 to 50% smaller than comparable features monitors, letting you set them up even in the smallest spaces.

Adjust your angle in any situation
It’s often overlooked – your studio monitors’ tweeters need to point at your ears. This is even more critical in modern studios where more and more musicians are using them at very close distances, like on a desktop beside their laptop or computer screen. iLoud MTM includes a tilting mount that not only helps isolate it, but also angles from 0° to 20° for correct positioning in a wide range of setups. That’s higher than most other “tilting” monitors, that too often can’t actually reach the needed angle for a desktop or other close-listening setup. iLoud MTM also includes a rubber base for horizontal placement, and a bottom thread to mount conveniently on mic stands, for more installation options. Combined with their symmetrical design and phase-coherent response, iLoud MTM allows for ultra-focused and accurate monitoring anywhere.

Digitally-controlled for precision audio
iLoud MTM uses audiophile-grade high-resolution algorithms and the top-of-the-line A/D converters to carefully manage cross-overs, filtering, time alignment, equalization, dynamics control and auto-calibration. Totally DSP-controlled and precision time-aligned, iLoud MTM also manages the off-axis response to manage the effects of room reverberations. The product of IK’s 20+ years’ experience in digital signal processing, the advanced processing onboard helps iLoud MTM deliver sound far beyond anything in its size or class., defined, point source sound that can’t be achieved by traditional 2-way systems at close distances. This means an even more natural, life-like sound, where the speakers “disappear” and you can focus on the music. It also minimizes the ear fatigue caused by traditional 2- or 3-way designs, where different frequencies arrive at your ear at different times. So you can mix longer, with less effort. iLoud MTM’s design also offers exceptional sound dispersion, enhancing the transparency and neutrality of what you hear.  The controlled dispersion minimizes the impact of room acoustics, for even truer monitoring.

Instantly adjust to any room environment
Today’s studios can be anywhere, from acoustician-designed spaces to a spare bedroom. Too many speaker manufacturers keep designing for ideal acoustic environments, ideal positioning and large listening distances. But many musicians simply don’t have that luxury. iLoud MTM offers built-in acoustic self-calibration via the included ARC™ reference microphone, to automatically adjust the frequency response to its placement. Just set up the monitors, put the microphone in your preferred listening position, press a button and you’ll instantly have a custom calibration for the sweet spot of your listening environment.

Hear your music as you’ve never heard before!