Join For Free
Share your location Order within 7 hrs 48 mins. 12 secs.
In Stock & Ready to Ship Orders placed before 3 p.m. ET usually ship the same business day (except weekends and holidays).
Ship to
Please enter 5 digits
Free Shipping Shipping and Delivery Times If we promise a delivery date and a delivery attempt is not made by this date, we will provide a refund of any shipping fees associated with your order. Questions? Call 800-449-9128
site1sku421183000000000 true true Change Location 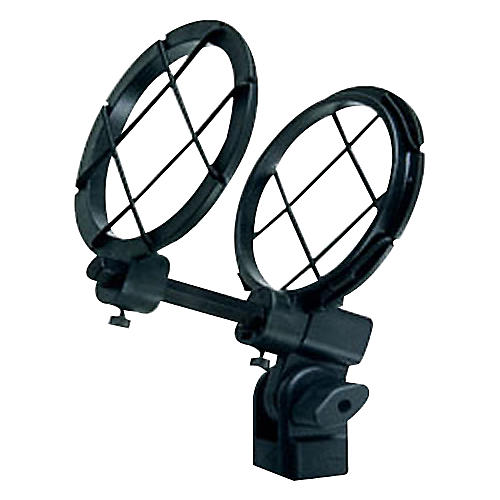 An inexpensive universal shock mount that works like the very best studio versions!

Studio engineers have long known the necessity for good shock mounts in getting the real sound of any mic, but the prices of some studio-quality systems are pretty outrageous. With the Sabra-Som SSM-1, small project studios can now have the same quality shock mounts as the large studios for every mic in the cabinet and at a fraction of the cost!

When a microphone picks up an audio signal, it also picks-up unwanted mechanical noise through the microphone stand. This is caused by vibrations in the vicinity such as the kick drum, low frequencies from amplifiers, an artist's movements, etc., etc. It's common for people to seek an electronic solution to this problem, such as use of a noise gate, re-equalization (elimination of low frequencies), etc. Such signal manipulations interfere with the dynamics of the reproduced sound, reducing headroom and degrading signal quality and "naturalness." The SSM-1 (Universal Noise Suppressor Microphone Support) was created to provide acoustic solutions for acoustic problems. We have tried lots of solutions, but the Sabra-Som SSM 1 decouples the mic from "thumps" better than anything else we know of, regardless of price. By physically isolating the microphone from its stand, the SSM-1 reduces undesirable noises up to 15dB.
Acoustic improvements from using the SSM-1 are often drastic and immediate.

Not just for the studio, the SSM-1 also allows the live engineer to recover the low end and low-mid efficiency of the system while sourcing the true response of the mic.

Fits any diameter mic up to 2", from heavy tube mic to lavalier

This clever little design uses powerful elastics on two rings that can be moved closer or farther apart along a hexagonal metal bar. You can mount anything in SSM1 from a heavy large diaphragm tube mic to a lavalier. It's versatility in mounting methods and adjustments makes the SSM-1 compatible with almost all shapes, sizes and types of microphone on the market, up to 2" in diameter. To correctly mount a microphone, simply weave it through the parallel, high-quality, braid-covered elastic bands of each ring, two by two.

The central articulated support can be adjusted and moved along a hexagonal rod to compensate for any imbalance in the set-up's center of gravity. For heavier mics, insert the body of the mic into the bands without weaving, to retain the elasticity. Then, if necessary, add an additional ring to the bar, by the bottom part of the mic, and weave it around the XLR connector, thus placing the weight of the mic on 3 rings at once.
Shop with a Friend
Free Shipping Learn More
2-Year Free Warranty on Guitars