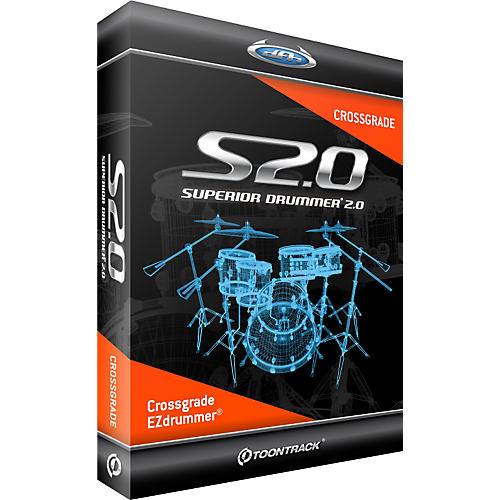 Join For Free
Share your location Order within 7 hrs 48 mins. 12 secs.
In Stock & Ready to Ship Orders placed before 3 p.m. ET usually ship the same business day (except weekends and holidays).
Ship to
Please enter 5 digits
Free Shipping Shipping and Delivery Times If we promise a delivery date and a delivery attempt is not made by this date, we will provide a refund of any shipping fees associated with your order. Questions? Call 800-449-9128
site1sku720002000000000 true true Change Location

Save money with this crossgrade for registered EZdrummer users.

The Toontrack Superior Drummer 2.0 drum sampler crossgrade offers registered owners of Toontrack's EZdrummer an opportunity to save some cash. Superior Drummer 2.0, featuring the first part of "The New York Studio Legacy Series," is a complete overhaul of the original dfh Superior engine. The Toontrack team made painstakingly sure not to lose any of the sound quality, attention to detail, and musicality of their popular drum sampler.

The new interface is reminiscent of EZdrummer with its simple handling and layout but gives the user layer upon layer of in-depth features to create the ultimate drum track.