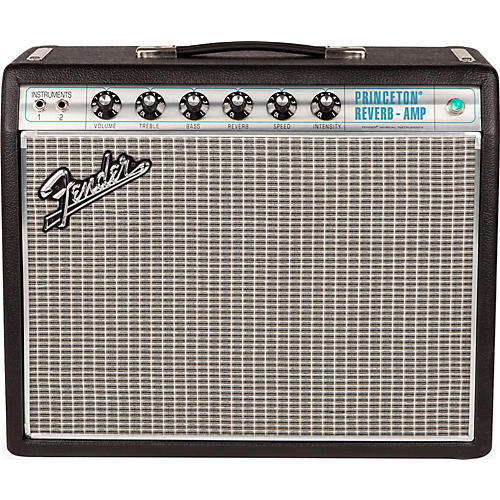 Join For Free
Share your location Order within 7 hrs 48 mins. 12 secs.
In Stock & Ready to Ship Orders placed before 3 p.m. ET usually ship the same business day (except weekends and holidays).
Ship to
Please enter 5 digits
Free Shipping Shipping and Delivery Times If we promise a delivery date and a delivery attempt is not made by this date, we will provide a refund of any shipping fees associated with your order. Questions? Call 800-449-9128
site1skuJ00632000001000 true 914=0;MFI=18 true Change Location

1968 was a transitional year for Fender amps with tone that was still pure Fender but a look that was brand new. With a silver-and-turquoise front panel and classy aluminum "drip edge" grille cloth trim, the Princeton Reverb received a fresh new face as it remained the perfect recording and gigging amp. Small, light and moderately powered, it produced big tube tone, with world-class Fender reverb and vibrato effects. For countless guitarists ever since, the Princeton Reverb has been the go-to amp for classic Fender sound.

Comes equipped with Celestion Speakers (30-Watt speakers) for a more modern, punchy sound that breaks up nicely when pushed. It features reduced negative feedback for a more "touch-sensitive" feel, quicker break up and added harmonic richness.The 68 channels are wired in phase and can be blended for more tonal options, via A/B/Y box. "Custom" channel features a 50s Tweed "Bassman" tone circuit for more low mids and sooner breakup. ˜65 Reissues have the same "Blackface" tone circuit on both sides. The 68 Princeton Reverb has only one channel so it features the "bassman" tone circuit.