Join For Free
Share your location Order within 7 hrs 48 mins. 12 secs.
In Stock & Ready to Ship Orders placed before 3 p.m. ET usually ship the same business day (except weekends and holidays).
Ship to
Please enter 5 digits
Free Shipping Shipping and Delivery Times If we promise a delivery date and a delivery attempt is not made by this date, we will provide a refund of any shipping fees associated with your order. Questions? Call 800-449-9128
site1skuJ00633000001000 true MFI=0 true Change Location 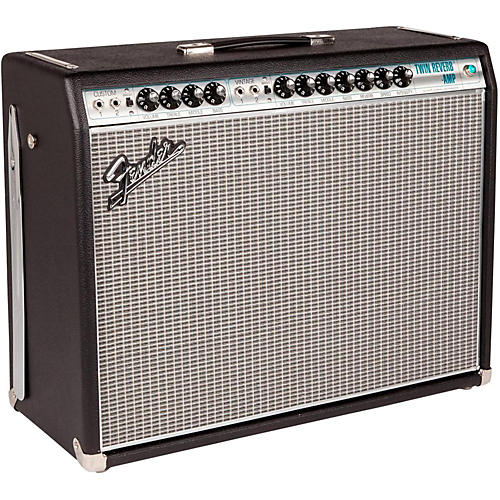 1968 was a transitional year for Fender amps, with tone that was still pure Fender but a look that was brand new. With a silver-and-turquoise front panel and classy aluminum "drip edge" grille cloth trim, the Twin Reverb received a fresh new face as it remained the backline amp of choice for pros and amateurs everywhere. Clear, deep and powerful, it produced big tube tone, with world-class Fender reverb and vibrato effects. For countless guitarists ever since, the Twin Reverb has been the go-to amp for classic Fender sound.

Comes equipped with Celestion Speakers (V Type) for a more modern, punchy sound that breaks up nicely when pushed. Reduced negative feedback lends a more "touch-sensitive" feel, quicker break up and added harmonic richness. The shared tremolo on both channels adds to its versatility. Because of this the '68 channels are wired in phase and can be blended for more tonal options, via A/B/Y box. "Custom" channel features a '50s Tweed "Bassman" tone circuit for more low mids and sooner breakup.