Join For Free
Share your location Order within 7 hrs 48 mins. 12 secs.
In Stock & Ready to Ship Orders placed before 3 p.m. ET usually ship the same business day (except weekends and holidays).
Ship to
Please enter 5 digits
Free Shipping Shipping and Delivery Times If we promise a delivery date and a delivery attempt is not made by this date, we will provide a refund of any shipping fees associated with your order. Questions? Call 800-449-9128
site1sku480726000000000 true MFI=1 true Change Location 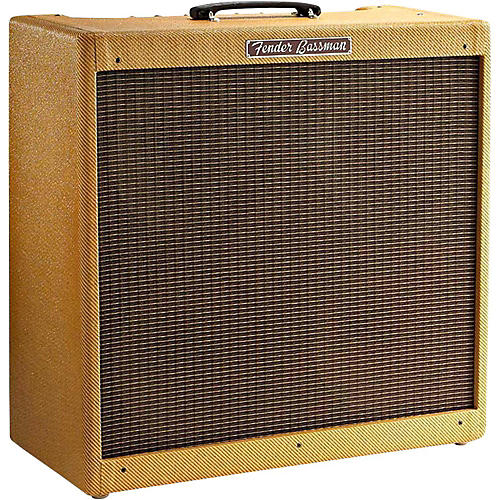 A decades-long favorite of bassists and guitarists.

The straightforward Fender 59 Bassman outperforms most of the fancy amps on the market today. In the 1950s, the Bassman was perfect for amplifying a new invention, the Fender Precision Bass. This 50W rig allowed the bass to hold its own on stage with drums, electric guitars and miked piano, the common instrumentation of the day.

Over the years, it also won the hearts of guitarists who, after experimenting with all kinds of preamps and effects racks, found its simplicity, great tone, excellent dispersion and touch-sensitive dynamics a true pleasure. This reissue is true to the original while adding several enhancements: U.S.-made GT-6L6 output tubes, improved 12AX7 preamp tubes, and an internal bias pot, making it easier to experiment with other output tubes. It also features a genuine lacquered tweed covering, solid finger-jointed pine cabinet, and an original-spec 4AR4 rectifier tube for natural compression when you play hard.

The Vintage Reissue '59 Bassman LTD comes with a fitted cover.

A classic, chosen by bassists, guitarists and harp players over decades. Get it now and love it.