Join For Free
Share your location Order within 7 hrs 48 mins. 12 secs.
In Stock & Ready to Ship Orders placed before 3 p.m. ET usually ship the same business day (except weekends and holidays).
Ship to
Please enter 5 digits
Free Shipping Shipping and Delivery Times If we promise a delivery date and a delivery attempt is not made by this date, we will provide a refund of any shipping fees associated with your order. Questions? Call 800-449-9128
site1skuL73112000001000 false 914=0;MFI=0 true Change Location 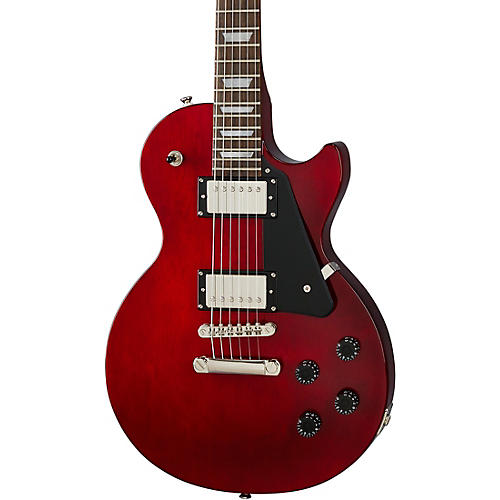 The Epiphone Les Paul Studio IG proves that a lightweight electric can punch above its class. Gibson’s original model made its debut in 1983. Essentially a Les Paul with less flash, it was designed for studio musicians who were primarily concerned with sound and playability. The Studio IG, however, leaves nothing to be desired. It’s got the tones and the looks to wow in any arena.

The mahogany body features Epiphone’s Modern Weight Relief, a process that removes less wood than a fully chambered guitar, while reducing resonances that lead to feedback. Topped in gloss maple, the Les Paul Studio IG will shine under stage lights.

The Slim Taper mahogany neck is designed for speed. Classic trapezoid inlays line the Indian laurel fretboard, which has a 12” radius.

The Epiphone Les Paul Studio IG is loaded with dual Alnico Classic Pro humbuckers. They deliver the traditional tonal characteristics of alnico, but with a higher, more modern output. Grover Rotomatic tuners offer rock-solid reliability for super stable tuning. A fixed bridge and stopbar tailpiece combo contribute to keep the strings in tune during the heaviest of bends.