Join For Free
Share your location Order within 7 hrs 48 mins. 12 secs.
In Stock & Ready to Ship Orders placed before 3 p.m. ET usually ship the same business day (except weekends and holidays).
Ship to
Please enter 5 digits
Free Shipping Shipping and Delivery Times If we promise a delivery date and a delivery attempt is not made by this date, we will provide a refund of any shipping fees associated with your order. Questions? Call 800-449-9128
site1skuJ01858000000000 true MFI=5 true Change Location 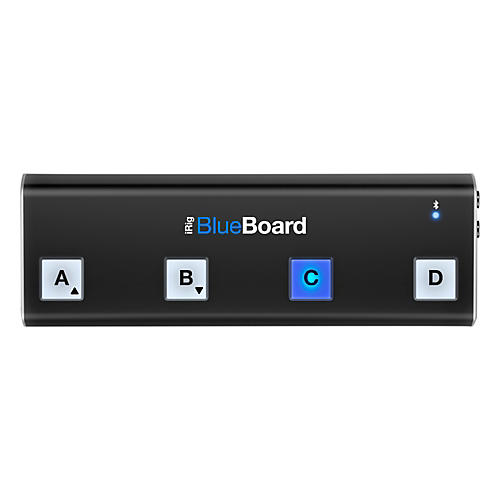 The first wireless MIDI pedal board controller for iPhone, iPad and Mac with the same degree of control and performance you've come to expect.

Guitar and bass players, singers and keyboard players will now be able to play and control their preferred iOS app on stage or in studio, with the same degree of performance control offered by traditional music hardware, and the freedom of not being tethered by cables. The iRig BlueBoard from IK Multimedia is the first wireless MIDI pedal board for iOS and Mac that allows you to control your music apps and more from the floor and is small enough to fit in a laptop bag. Switch between presets, change patches, turn effects on and off, and control effects like volume wah pedals all from the stage floor without worrying about tripping over wires. Setup is as simple as turning the iRig BlueBoard on and telling it what you want to control.

It connects to your iPhone/iPod touch/iPad or Mac via Bluetooth with control up to 10 meters away, and when you press its foot switches, it sends out control signals that are converted to MIDI by the iRig BlueBoard app. The control messages sent from iRig BlueBoard to AmpliTube or other Core MIDI music apps can include bank up/down, MIDI continuous controllers, as well as parameter changes on apps such as IK's AmpliTube, VocaLive, SampleTank, and iGrand Piano iOS apps plus many others, such as Apple GarageBand.

iRig BlueBoard features four backlit soft-touch pads housed in a sturdy, stage-worthy chassis, two TRS expansion jacks for connecting additional MIDI controllers like expression pedals, and is powered by four standard AAA batteries. Each pad has an additional LED that lights when the pad is active, letting you know exactly which control is on. And since it's backlit, you can easily see it on a dark stage or performance venue for quick and accurate access.