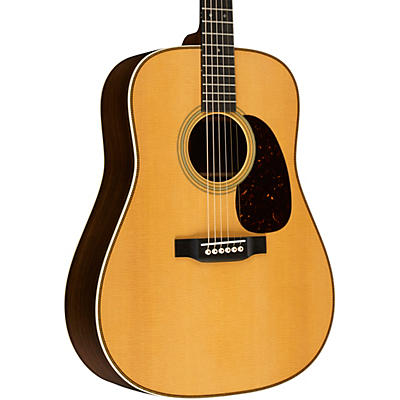 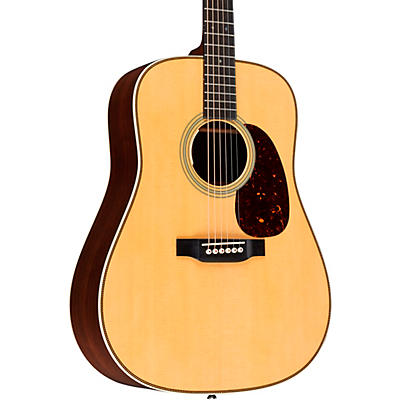 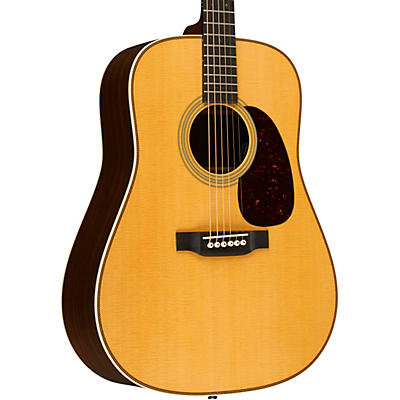 The Martin HD-28 is one of the most popular Martin acoustic guitars produced today. A recreation of Martin's legendary herringbone-style 28 guitars (the H in HD stands for herringbone), the HD-28 series is based on the iconic pre-war dreadnought Martin guitar, one of the many guitar construction innovations Martin developed throughout its long history. The legacy HD-28 features Martin's legendary scalloped X-bracing, while the new 2018 Martin HD-28 features forward-shifted, scalloped X-bracing. Scalloped X-bracing allows its Sitka spruce top to vibrate more freely. The results are booming volume and open tone. The forward-shifted X-bracing of the 2018 HD-28 produces additional clarity on the high end, and punchy, more defined bass.

Today, the HD-28 guitar recalls the pre-war glory days of the model. Long prized by players and collectors for its stellar tone and elegant styling, you'll find herringbone purfling, a stylized strip of trim that adorns the body (as designated by the H in the model name). It is available in several variations, including the Standard. The Martin HD-28 Standard crafted with a solid Sitka spruce top, solid rosewood back and sides, mahogany neck with ebony fingerboard, and the classic zigzag backstrip. The HD-28V Vintage sports some popular pre-war appointments such as butterbean tuning machines, diamond-and-squares fingerboard inlays, and forward-shifted scalloped bracing, while the HD-28VE acoustic-electric model incorporates a Fishman Ellipse Blend amplification system, with a flexible soundhole-mounted mini condenser microphone for outstanding amplified tone. The HD-28E Retro was painstakingly modeled after a classic 1941 D-28 from the Martin Museum, and updated with modern enhancements like a High Performance Neck taper and a Fishman F1 Aura+ electronics system, for unparalleled tone when amplified. Whether you're a folk singer, bluegrass picker, or just plain lover of finely crafted acoustic guitars, the Martin HD-28 sets the standard by which all others are judged.

The dreadnought design the Martin HD has evolved from had its origins in 1916, when guitars were beginning to gain in popularity as band instruments. Most guitars of the time were smaller, parlor-type instruments, but with the rise of the guitar as an integral part of a larger ensemble, the need arose for a design that provided a louder, more powerful tone. This new Martin dreadnought design featured a larger, deeper body that produced much more volume, especially in the bass register. The name came from the Dreadnought class of battleships that had been introduced several years earlier and had caught the public's attention. At the time, dreadnought battleships were the largest, most formidable weapons on earth. It was said they had nothing to fear, hence, Dreadnought.

As the new dreadnought guitar design was deemed to be as loud as a canon, the name seemed a natural fit. Today, the dreadnought, found in the Martin HD and D series, is perhaps the most common body style for acoustic guitars from all manufacturers. Martin guitars are legendary for their outstanding quality and tone, and the Martin HD-28 dreadnought guitar is one of the finest examples of their guitar making expertise. If you're not sure a Martin HD-28 is right for you, shop the full collection of Martin guitars.