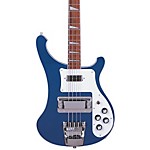 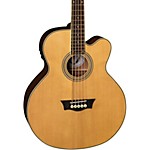 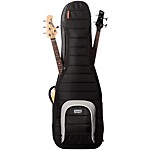 Try to imagine the sound of music with no bass instrument. Without the low throb and pulse building a foundation for everything else, it wouldn’t be compelling. For decades, in jazz and pop, the bottom end came from the upright, double bass. Since the early 1950’s, most of that has shifted to the far more portable bass guitar. From the earliest Fender electric bass to the full gamut of builders today, the choices encompass instruments that fit any style of music and any budget. Musician’s Friend offers a huge selection of bass guitars from makers like Ibanez, Gibson, Spector, Ernie Ball Music Man, G&L, Hofner, Squier, Warwick, Epiphone, Mitchell, Guild, Gretsch, Lakland, Fodera and many others. We also offer a selection of double bass instruments for those who choose to swing that way.

Electric basses are available in several different types. While most are solid-body instruments, there are chambered, semi-hollow and full hollowbody versions, both fretted and fretless. Another variation is scale length. Long-scale basses (usually the 34” standard set by Leo Fender with the Precision Bass) have a more piano-like attack and articulation. This is due in large part to the higher string tension. Short-scale basses, like the Fender Mustang and the Hofner violin bass, are more “finger-friendly” with a warmer, somewhat rounder tone. Short-scale instruments are also great for younger players and players with smaller hands.

These 5, 6, 7 and. 8-string instruments offer several advantages. The additional strings, both low and high, enable a wider range of available notes in a single hand position. They also enable more flexibility in soloing and deliver the thunderous low-frequency sound in demand for modern metal. A recent development has been the multi-scale bass, in which the bridge and nut are slanted such that each string has a different scale length. This has several ergonomic advantages for players, as well as improving intonation.

For centuries, this was the territory of the symphonic double bass. In the early 1970s, perhaps inspired by the Guitarron Mexicano (literally “big Mexican guitar), manufacturers began to make acoustic versions of the 4-string bass guitar. These became increasingly popular thanks to MTV’s Unplugged series, where they were heavily used.

The History of the Bass

The genesis of the bass stringed instrument lies in the mid-16th century in northern Italy where the first versions of what was to become the double bass were crafted. Also known as the contrabass, bass viol, bull fiddle and, in more modern times, doghouse bass, early versions appear to be derived from the 6-string viola da gamba, rather than the violin. While long a staple of the symphony orchestra, in the early 20th century, it began to be used in popular music, most notably replacing the tuba in the new musical style of jazz.

Although the first electric bass guitar was invented in 1936, by Paul Tulmarc, and marketed under the Audiovox brand, it wasn’t widely adopted. We had to wait until 1951 for it to become an integral part of the musical world. That was the year that Leo Fender introduced the world to the Precision Bass. Legend has it that Fender built it to enable guitar players to have an instrument they could double on, as big bands gave way to smaller combos. By the end of the 1950s, the electric bass guitar was surpassing the double bass in numbers, thanks to the explosive popularity of rock and roll. Even jazz players, like Wes Montgomery’s brother Monk, were swapping in their double basses for the convenience and versatility of the bass guitar. By this time, many other manufacturer’s were beginning to add bass guitars to their product lines. This burst of innovation had given us, by the end of the ‘50s, many of the features that carry over too today’s basses. The first thru-neck bass was produced in 1957, for example, and manufacturers like Danelectro, Kay, Burns, Hofner and Gibson offered a variety of scale lengths, pickup configurations and body styles, many of which are still in use today.

Throughout the 1960s and ‘70s, the instrument matured, from the introduction of the Fender Jazz Bass in 1960, Gibson’s short-scale EB-3 and long-scale Thunderbird a couple of years later. By the early ’70s, the boutique bass market was beginning to appear, starting with the startlingly advanced based Alembic began building with active electronics and new materials, like carbon graphite prominently features. Music Man, founded by Forrest White, Tom Walker and Leo Fender introduced the Stingray bass in 1973, one of the first regular production basses to feature active electronics. A year previously, George Fullerton, another Fender alumnus had worked with Ernie Ball to develop the Earthwood bass, the first successful acoustic bass guitar, and the connection between former Fender designers and Ernie Ball led the way to today’s Ernie Ball Music Man line, where the Stingray is still available. By the mid-‘70s, we started to see the first 5- and 6-string basses from Alembic, Tobias and other boutique builders and by the end of the decade, this extended range basses were beginning to spill into regular production instruments.

The 1980’s saw Ned Steinberger develop the headless bass and pioneer further use of modern high-tech materials in guitar construction. It was also the birth of new brands like Warwick, Spector, Fodera and many others who pushed forward the evolution of the bass guitar, expanding the choices in body styles, pickups and electronics. The innovation has never stopped since and bass design keeps pushing toward a future and it’s all about that bass. The bass guitar is still a showpiece of how new technologies find their way into instrument design. Every year, there’s some new idea, some clever twist on a previous concept that finds its way into the world of basses, and you’ll always find it here, at Musician’s Friend.